Rostam: An interview with an ex-Vampire

The multi-instrumentalist, producer and Vampire Weekend co-founder on his solo album, his conflicted relationship with America, and why Brian Eno is his musical role model 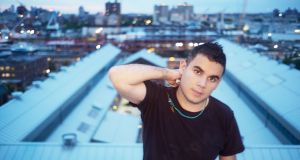 Over a dodgy phone line with a three-second delay, Rostam Batmanglij is outlining what he sees as his duty as a producer of and co-songwriter with the likes of Solange, Santigold, Charli XCX, Carly Rae Jepsen and his former band, Vampire Weekend.

“It’s always my mission to try to do something that hasn’t been done before, whether that’s musically, lyrically or in terms of mixing. There are ways to do things differently, and I’m always interested in reaching that higher ground.”

Raised in Washington DC, the son of Iranian parents – his mother a food writer, his father a publisher – it seems as if reaching higher ground was never too much of a stretch for Rostam. The 33-year-old multi-instrumentalist and songwriter – the younger brother of filmmaker Zal Batmanglij – majored in music at New York’s Columbia University, which is where he co-founded Vampire Weekend in 2006.

Rostam studied classical and popular harmony. If there were a band whose music he loved, he would aim to recreate their sound in a song of his own. Writing songs in a wide range of different genres, he says, is the only way to understand how recordings work. His “Bible”, he says, is The Beatles – Complete Scores (published by Hal Leonard, 1993).

Listening to his new debut album, Half-Light, is to have some understanding as to what drives Rostam. If there is any intuitive producer/songwriter of standing it reminds you of, it is Brian Eno. In a similar way to Eno, Rostam made it up as he went along, gradually settling into a place of expertise and experience.

“I am a very big fan of Brian Eno, of his work as an artist and making his music, and as a producer. In some ways, I have looked to his career as a model for my own. He can do multiple things, exist in multiple worlds, he can chase down any musical idea that he wants, but also contribute to other people’s musical beliefs. That’s something I’ve been able to do, and been lucky enough to do, in my life.”

Half-Light took some time to piece together. It’s cohesive and textured, but the songs had to be worked on during blocks of time away from actually making a living. He insists it was “a real album, always an album in my mind”.

It’s an interesting admission for a songwriter to make at a time when standalone tracks are the preferred method of listening to music.

“I’m as guilty as anyone else of listening to music track by track. I do think, however, that as I was finishing Half-Light I realised how powerful it could be to put a title on a collection of songs, and how that title night increase the depth and meaning of the songs, and how they interact with each other.”

When it came to producing self-written songs, what problems arose? “The process takes time to gel. It became about trusting that it would take time to get to where I wanted to go, and knowing where that was. Usually, I knew what I wanted to achieve.”

Is it the same as what he would ideally like to accomplish with the artists he produces and co-writes with? “Whether I’m the one who is starting an idea, or if it’s the artist, when I’m with them as their producer I’m definitely working in their service. I don’t have any methodology, so there’s no one way in which we work together. What I love is the openness of collaboration.”

He had a specific motive with Half-Light, he says, aside from it being a cohesive listening experience. “The aim was trying to tell stories and to speak from my own perspective as someone who grew up in America as the son of immigrants, who has always had a conflicted relationship with their identity as an American, and as someone who does not identify as straight. I felt like I wanted to tell the world something about my experience. That was always in the back of my mind.”

– Half-Light is out now on Nonesuch Records

Rostam on not being in Vampire Weekend anymore

“I think a lot of people want to bifurcate my career and say there was a before and after Vampire Weekend, but I feel I’ve always had the same career – pretty much every recording I’ve been a part of has been as a producer in more ways than one.

“I’ve treated every recording as if it were my own song and given them the same time and energy that I give to anything. There’s a myth of being a member of a band, and then not being a member, as if it’s a change from the norm. Yes, there’s an outward variation in terms of perception, at least, but not internally.

“Me not being in Vampire Weekend is just a natural extension of what I’ve always done.”