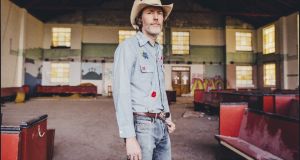 If you’re going to go to the trouble of watching a total solar eclipse, it might as well be in the middle of a cornfield in Nebraska. “I had never seen totality, only a partial one,” says David Rawlings from a hotel room in Minnesota. “It was indescribable. As someone said to me, it’s the difference between a hot dog and a hog.”

Such evocative imagery offset by a grounded sense of humour sums up Rawlings pretty well. The Rhode Island-born songwriter has been playing guitar since 16. He attended the Berklee School of Music, where he met his soulmate in life and music, class of 1992 graduate Gillian Welch. The pair later moved to Nashville, did the dive-bar circuit and forged a recording and songwriting partnership that began with Revival in 1996 and has since spanned a back catalogue released under various names: most of them Welch’s and some of them as Dave Rawlings Machine.

When Rawlings speaks about his music it is always using the terms “we” and “our”. Poor David’s Almanack is their eighth collaboration and the first they’ve put out as David Rawlings.

“The only thing that I can point to that could maybe in some way justify the name change was that I was the sole writer on five of the songs,” he says. “I’ve always enjoyed writing with other people but I think I’d just gotten a little more comfortable with being out front.

“The picture that was created when we thought ‘David Rawlings – Poor David’s Almanack’ was very in keeping with this record, and with the folk and singer-songwriter traditions that our music comes out of. When I think about my record collection, it’s littered with people who just perform under their names, [like] Bob Dylan and Neil Young. It seemed like it was time to join those ranks, y’know? Or to take a little step towards them.”

The album, recorded at their Woodland Sound studio in East Nashville, and which also features past and present members of Old Crow Medicine Show and indie-folk band Dawes, came together more quickly than any of their previous releases, despite the fact they were concurrently writing for a new Welch album.

“I think five of the songs ended up being cut in a day, in about five hours. We weren’t sure if we should even go ahead and put it out,” he says. “The material had a sort of structural simplicity and was so tied to the folk tradition that I just wasn’t sure. It didn’t seem like anything anyone I knew was doing at this point in time, but we thought, Well, maybe that’s because nobody wants to hear it.”

Rawlings and Welch’s role in shaping modern American folk music has not gone unnoticed. In 2015, when both were still in their 40s, they were presented with a lifetime achievement award for songwriting at the Americana Honors and Awards.

“It was a wonderful thing to get, but I also felt like, well, we’re sort of just getting started ... I hope this doesn’t mean you want us to stop?” he says, laughing. “But obviously, if you take a moment to stop and really think about it, you can be overwhelmed by it. It’s the same thing whenever you meet someone who was influenced [by you], or their music was shaped in some way by what you do. The only way I’ve ever known to respond to that moment is to think of the music that inspired me as a young man ... You realise that you’ve become a link in the chain. And so you just have to say ‘thank you’ and let people know that that’s the reason to do it.”

When it comes to guitar, Rawlings pays homage to the tradition but also draws influence from other genres. He tells a story about Purple Rain subconsciously influencing his solo on Gillian Welch’s song Revelator; about Chet Baker’s trumpet playing influencing the improvisational nature of his playing; and about emulating Johnny Marr’s layering technique to create atmosphere within a song.

His love of The Smiths is well-documented: Ryan Adams’s debut solo album from 2000, Heartbreaker, opens with a studio snippet titled An Argument with David Rawlings Concerning Morrissey, which leads into a song they wrote together, To Be Young (Is to Be Sad, Is to Be High).

“Ryan and I had talked about how much we loved Morrissey before that,” he recalls, laughing. “That song got started one night at a party at our house; we were jamming, and that kind of popped out. I talked to him a couple days later and said ‘We should finish that song we were writing’ and Ryan said ‘What song?’ ”

He’s momentarily caught off guard when I ask if he is where he thought he would be all those years ago when he first rolled into Nashville.

“Just yesterday we pulled into the festival very early in the morning because it was the only time to do a sound check. The XM radio was on and it was playing a track that we played on; it was the very last record that Ralph Stanley made. Listening to it, I couldn’t believe that that was my voice and Gillian’s voice and that I was playing clawhammer banjo that was doing the job on a Ralph Stanley record,” he chuckles.

He pauses again. “But ... I don’t really feel any differently than I did on the day I moved to Nashville, wanting to play my guitar and sing and make music for a living at whatever level I could. So the fact that I’m speaking to you from a hotel room somewhere, where tomorrow I’ll go over to a soundcheck and get ready to put on a show somewhere? That’s exactly where I thought I’d be.

“If I was lucky, it’d be out of town – or else I’d be waking up in my town and working my day job, but waiting to go out and play a gig that night.