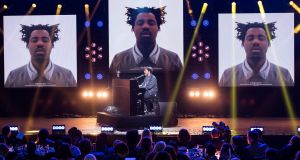 Sampha performs on stage after winning the 2017 Mercury Prize at the Eventim Apollo in Hammersmith, London. Photograph: David Jensen/PA Wire

The musician said he “felt like I’m dreaming” as he was announced as the winner of the prize at a ceremony in London’s Eventim Apollo on Thursday night.

The south Londoner beat off competition from Ed Sheeran and Stormzy to take home the UK’s most prestigious music award.

He received his prize from actor Idris Elba and told the crowd: “This is incredible.

“Thank you to the judges for thinking that my album is good enough.”

Host Lauren Laverne said his win was the result of the longest-ever deliberation by Mercury judges, which this year included Jamie Cullum, Ella Eyre, Marcus Mumford and Jessie Ware.