The former Smiths frontman says ‘the news contrives to frighten you, to make you feel small and alone’, on first new track since 2014 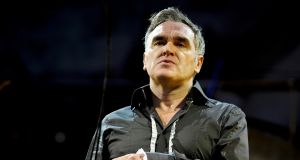 Singer Morrissey has released his first new music since 2014, with Spent the Day in Bed, the first single from his album Low in High School. Backed by chirpy organ and strummed guitars, it’s a typically existentialist, Eeyoreish song from the former Smiths singer, in which he rejects the “emasculation” and “castration” of the rat race, instead recommending that you stay in bed and ignore the news, “because the news contrives to frighten you / to make you feel small and alone / to make you feel that your mind isn’t your own”.

However, Morrissey has dipped his toe into the 24-hour news cycle by joining Twitter this week. His first tweet was the title of his single, with another joining it that listed a string of US states, perhaps alluding to a forthcoming tour.

He has made numerous political statements in recent years, from castigating Donald Trump and Sadiq Khan to campaigning for animal rights; the album cover of Low in High School features a boy outside Buckingham Palace, carrying a hatchet and a sign that reads “Axe the monarchy”. A statement from his label said his new album will “capture the zeitgeist of an ever-changing world”.

Sex and the Irish: We were always a law unto ourselves
6