Artists carry white roses in protest against sexual harassment as Stormzy asks ‘Theresa May, where’s the money for Grenfell?’

At the BRIT Awards in London last night performer Stormzy challenged the UK government's handling of the Grenfell tragedy during his set. Video: BRIT Awards Limited 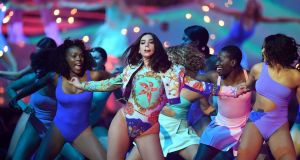 The Brit awards became the latest awards ceremony to show support and solidarity with the Time’s Up movement, with artists including Dua Lipa, Ed Sheeran and Camila Cabello wearing white rose pins or carrying white roses to protest against sexual harassment in the entertainment industry.

Anne Marie, Ellie Goulding, Sam Smith, Rag’n’Bone Man and Rita Ora also made the gesture after the awards organisers invited attendees to don the pins, which were distributed before guests arrived on the red carpet.

Receiving the first award of the evening for best British female solo artist, Dua Lipa thanked “every single female that’s been on this stage before me that has given girls like me – not just in the music industry but in society - something to look up to, and has allowed us to dream this big. Here’s to more women on these stages, more women winning awards, and more women taking over the world.”

The 22-year-old was not the only breakthrough act who beat much more experienced competitors to the top prizes at the ceremony at London’s O2 Arena.

Stormzy, AKA 24-year-old south London grime rapper Michael Omari, beat big names including Sheeran and Liam Gallagher in the best British male category, thanks to the piercing flow and emotive balladry showcased on his debut album Gang Signs and Prayer. That LP also won the most prestigious award of the night, British album of the year, again beating Sheeran as well as Rag’n’Bone Man, J Hus and Lipa.

Lipa may have lost in that category but picked up two other major awards: best British female and British breakthrough artist. The Kosovar Albanian pop singer has slogged her way to the top of the charts, emigrating to London alone as a teenager, working as a model and on the door of nightclub while she launched her music career. Her hit single New Rules reached a billion views on YouTube this week, and current single IDGAF is in its fourth week in the top five.

The singer-songwriter Rag’n’Bone Man scored his third Brit award in his still-ascending career, as his earthy anthem Humanwon best British single. Last year he won the breakthrough award as well as the critics’ choice award – he performed at the ceremony with the 2018 winner of the latter prize, soul and R&B singer Jorja Smith.

Kendrick Lamar was voted best international male, following the incendiary politics and spiritual battles showcased on his blockbuster album Damn. He was a surprise performer on the night that also featured performances from Lipa, Sheeran, Stormzy, Justin Timberlake, Sam Smith, Rita Ora and Foo Fighters, who were awarded best international group – their fourth win in the category in their three-decade career.

In a sombre segment, Liam Gallagher performed Oasis hit Live Forever in tribute to the victims of the Manchester arena bombing, after Ariana Grande pulled out earlier in the day due to sickness. Despite his telling the Guardian earlier this week the Brits could “f**k off if they think I’m going to go there and clap some f**king idiot”, it was a raw and poignant performance.

Albarn said: “I’ve got one thing to say and it’s about this country. This country is, believe it or not, quite a small little thing. But it’s a lovely place, and it’s part of a beautiful voice. Don’t let it become isolated. Don’t let yourselves become cut off. Considering our size we do incredible things in music. We’ve got a real spirit and a real soul and don’t let politics get in the way of all that shit.”

Host Jack Whitehall then whispered: “I think they were talking about Brexit.”

The night will have been a disappointment for Ed Sheeran, who, despite releasing the biggest-selling album in the UK last year with ÷ (Divide), missed out on wins in the biggest categories. He was, however, awarded the global success award, a non-nominated prize that recognises international commercial success by British artists. After not even being nominated for the major prizes at the Grammys earlier this year, it’s clear that the public’s adoration of the singer-songwriter isn’t currently matched by the industry figures who vote for awards.

On the arena floor, the singer Jess Glynne told the Guardian: “I’m wearing a rose to show solidarity with the Time’s Up movement. Women in music should use their platform to help enact change because you’re a role model to so many people. We’ve all experienced sexism. In the past I’ve been shut down, not had my opinions listened to. So I would say to all young women stand for something and believe in yourself.”

The night was interspersed with political references. When Dermot O’Leary asked what was missing from this year’s ceremony, Emma Willis, presenting an award with him, replied “Female co-host?”

The evening ended with a performance by Stormzy, moments after winning British album of the year, in which he rapped: “Theresa May where’s that money for Grenfell?” – Guardian Service

Of poppies and croppies
8

How The Simpsons predicted 9/11, Trump and Disney-Fox
10 Unveiling the enigma of Chirico
Real news has value SUBSCRIBE