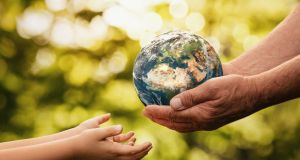 ‘There’s a scientific consensus that the lives of children are going to be very difficult,’ US Democratic Party politician Alexandria Ocasio-Cortez has said.

Climate change is bringing about a radical realignment in our moral thinking. If we have just a few years to save the planet, then reducing carbon emissions becomes the global priority number one.

This has implications for governments and businesses in strategic decisions, but also for individuals in their most intimate and personal choices. Should you eat steak? Should you drive a car? Should you use airlines? Added to these questions, more people are asking: Should you have children?

When Josephine Ferorelli and Meghan Kallman first met at a concert in 2014 they discovered they were separately grappling with this dilemma. Both aged 30 at the time, the Chicago-based writer and Rhode Island sociologist decided to set up Conceivable Future – a network for people feeling conflicted about starting a family against the backdrop of impending climate chaos.

It has since collected dozens of testimonies from across the world.

“My partner and I have taken the decision that unless global attitudes change entirely (which doesn’t seem plausible within our lifetime), it would be inconceivable for us to bring children into the world,” writes one Irish woman (37) on the site.

“It has sometimes been difficult to deny the natural urges that comes to approaching this age in life. Every time I do, I just take a stroll along the plastic covered beaches or a walk through what’s left of the forests here in Ireland. How much more damage do we have to cause for people to come to the same realisation?”

The sentiment is spreading. A 2018 New York Times poll showed that a third of Americans aged 20 to 45 cited climate change as a factor in their decision to have fewer children.Last year, Alexandria Ocasio-Cortez – the prominent Democratic Party advocate for a Green New Deal plan in the US – said “there’s a scientific consensus that the lives of children are going to be very difficult. And it does lead, I think, young people to have a legitimate question: Is it okay to still have children?”

According to carbon footprint data, a US family which chooses to have one fewer child would provide the same level of emissions reductions as 684 teenagers who recycle for the rest of their lives.

Ferorelli and Kallman, this week’s Unthinkable guests, stress they are not against having babies, but they wish to highlight how a failure of political leadership is forcing young people to consider factors their parents never had to worry about.

“There are no ‘correct’ individual answers in this terrible bind,” they say, “but there is solace and strength in coming together and speaking the truth.”

With Conceivable Future, you say you’re inviting people to join a “highly personal and deeply political conversation”. Is part of your motivation to help people who may feel isolated in deliberating about these issues?

JF&MK: “Yes, a major reason that we founded Conceivable Future was because we recognised that the climate crisis – as we’ve been taught to think of it – is an isolating and alienating issue. People were experiencing so much individually. Our generation has taken up the burden of shame that should belong to those that profit from fossil fuels, and this shame has created a social taboo against speaking of the real future, and how we imagine ourselves in it.

“Many people who we’ve spoken with felt as though they were treated as crazy for thinking through what climate change meant for their reproductive lives. This taboo against talking – because it makes one seem fringy and alarmist – lands on top of another cultural silence: we have very few spaces to discuss our reproductive lives and decisions freely, without judgment, even without the particular threat of the climate crisis.

“There is so much cultural baggage wound up into this conversations, generations of hopes and dreams and resentments and expectations - and that kind of cultural silence can create so much shame. These issues are deeply connected, and our climate-concerned peers have been starving for a place to make sense, together, of the terrible forces bearing down on us.”

Have you found certain shared themes among those who have testified or contributed to date?

JF&MK: “You bet. Aside from the general relief many participants express at finding others who share their concerns, the main narrative, whether people are leaning toward childbearing or not, is that the future is terrifyingly uncertain, and that most of what we were raised to believe about how our lives would be is proving untrue or inadequate, and that the scale of the crisis is so vast that it makes it hard to feel that even the biggest life decisions are important.

“Many participants have said that they fear if they don’t have children they won’t have any children in their lives, that they’ll become more isolated. They wonder what to do with all their gifts - the skills they have, the old family heirlooms, etc. - if they’re not parents.

“Many have also said that if they do have children, they’re afraid they won’t have the time, money or energy left to do difficult work that obviously needs doing for a just transition away from fossil fuels. Some participants are struggling to find ways to substitute for what they imagine they’ll miss in the parent-child love relationship. Some participants are struggling to find words to explain to their children what is happening in the world, and what the future may become.

“Many teachers grieve like parents for the harm that is coming to the children in their care.

“There is also a theme around gender. Women tend to experience more social pressure and expectation to be mothers, and they face a lot more backlash if they question that, or decide against it – for any reason, including but not limited to climate. A lot of people feel guilty simply for wanting to have children, and some people who do not want to have children feel relief that they’ve found a place where their decision is respected, not challenged.”

If you’re happy to speak about your own personal perspectives can I ask how the project has influenced your own thinking about reproductive and parenting decisions?

JF: “I have to say that when we began this work six years ago I honestly expected that it would help me come to a peaceful decision for myself. This was not the point of the project, but it seemed like a possible outcome.

“As it stands now, I am much more informed about every factor, and about how many of my peers are resolving these dilemmas for themselves, but the foundational push-pull, what Lauren Berlant aptly calls ‘cruel optimism’, is unchanged in my heart underneath all that. The desire to bear a child, and the terror of the world they would live to see. I’m leaning toward no, but I believe I’ve got a handful of good years to remain fruitfully ambivalent.”

MK: “Like Josephine, I understand more dimensions of this conversation than I ever thought that I would. And while I remain undecided, I do feel like I’ve thought about this from every possible angle. That thoroughness, I suppose, helps me feel like my decision will be a peaceful one.

“I want to stress, though, that at Conceivable Future we don’t believe there’s a right answer to the question of ‘should I have kids?’ The answer will be different for every person – and the only right answer, as far as we can see it, is to work immediately for the kinds of systemic, justice-oriented solutions that ensure a safer future for everyone’s children.

“Whether or not I have children is immaterial to the issue – it’s the fact of the question, not my answer or anyone else’s, that matters.”