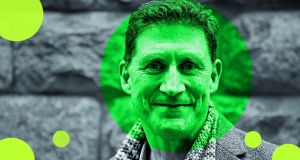 Eamon Ryan: the 57-year-old Dubliner, who lives in Clonskeagh, has led the Green Party over the past 12 months to its greatest results. Photograph: Nick Bradshaw / The Irish Times

Eamon Ryan is not a regular smoker, but – in the years when he was rebuilding the Green Party with no money, staff, or even salary for himself – he took to the roof of the party’s headquarters for the occasional puff.

The Greens were wiped out in the February 2011 election, losing all six of their TDs – Ryan lost out in Dublin South – following a term with Fianna Fáil in government, which saw the arrival of the European Commission, IMF and European Central Bank troika to Ireland.

Not only did the Greens lose all of their Dáil seats in that election, but they also dipped just below the 2 per cent of first-preference votes threshold required by political parties to receive State funding.

Ryan had been Minister for Communications between 2007 and 2011, but in the months that followed the election, he began the slow work of reconstructing a traumatised party.

“What he did after 2011 – that is a really big thing, going into an absolutely empty office with an absolutely empty bank account,” says one source who has worked with Ryan. “And seeing people who were falling over you months ago barely taking your calls.”

In the Greens’ headquarters on Dublin’s Suffolk Street, almost on the corner of Grafton Street, Ryan took over the office that was allocated to the party’s general secretary when it had a full-time staff. The view from the top of the building as he smoked – although he is said not to have lit up in months – takes in Dublin Castle.

From that point, the 57-year-old Dubliner, who lives in Clonskeagh, has led the party over the past 12 months to its greatest results: the local and European elections last year saw it win 59 council seats and send two MEPs to the European parliament; and in February’s general election it returned 12 TDs to Dáil Éireann.

In between, Ryan became a TD again in 2016, when he and Green deputy leader Catherine Martin won seats in Dublin Bay South and Dublin Rathdown respectively. Ryan had a full salary after years when he relied on consultancy work across Europe for income. The Greens regained access to State funding, too.

The 2014 European elections saw Ryan fall marginally short of taking a Dublin seat, but party insiders say the narrow loss was a blessing in disguise: had Ryan gone to Brussels, the Greens would have lost the driver of their recovery from the domestic political stage at a crucial period.

As his party continues government formation talks, potentially entering coalition with Fianna Fáil and Fine Gael itself, many older Greens say they will not forget Ryan’s efforts at a time when it could have been easier for him to get a lucrative, permanent job in the energy or environment sectors.

They may feed into an emotional argument if and when the party membership debates entering government, although the Greens are known to base their decisions on policy rather than sentiment or personality.

If a programme for government is agreed – with the demand that carbon emissions reductions must be accelerated to an average of 7 per cent per year chief among the Green aims – it needs to be supported by two-thirds of Green members in a ballot. That will not be an easy task.

The recent increase in the Greens’ membership (as public concern has grown over climate change, it has swelled from 700 two years ago to more than 2,700 members) means swathes of Ryan’s own ranks are unaware of his efforts between 2011 and 2016, say party figures.

“You have the very new membership in the past two years that wouldn’t even be aware of that,” said one.

The rebuilding efforts have already been used to support Ryan in internal debates. Ryan’s predecessor as leader, John Gormley, cited them when arguing for a one-candidate ticket in Dublin Bay South in the February election, when councillor and party chair Hazel Chu sought to become Ryan’s running mate.

Experienced Greens are confident a deal will be ratified if the Green negotiating team succeeds in winning serious policy concessions, although some members report scepticism among the young rank-and-file.

Other party sources say councillors are concerned about entering government with Fine Gael in particular, coloured by their view of Leo Varadkar’s party’s record in government and council chambers over the past decade.

Ryan has already shown he can bring people around, argue others, by convincing the parliamentary party to enter talks at all. His desire to enter government is well known, and he too believes he can bring the party with him if a deal is struck.

He is “relentlessly positive”, according to one person who has worked with him, an assessment shared across Leinster House, where he is a friendly presence.

He is married to journalist Victoria White, and they have four children: three boys and a girl. Both Ryan and White have spoken of their experience of having a son, Tommy, who has autism. Family life is said to be hugely important, with holidays on Inisbofin an annual highlight when circumstances allow.

Ryan’s passion for climate issues was sparked during his time at Gonzaga College, where party colleague and friend Ciaran Cuffe was a contemporary.

He joined the Green Party in 1988, partly to restore his confidence after a period of unemployment and, a year later, became Gormley’s campaign director in Dublin Bay South in the 1989 general election.

A successful cycling holiday business followed, before the tilt towards full-time politics. Ryan ran for the Seanad but failed to get elected in 1997, was co-opted to Dublin City Council the same year after Gormley was elected to the Dáil, and was then elected as Dublin South TD himself in 2002, a seat he held until the 2011 meltdown.

He tried to win a nomination to run for the presidency in 2004, when Mary McAleese was returned unopposed for a second term, in a failed effort that led to internal strains and contributed to his poor relationship with former Green TD and now Independent councillor Paul Gogarty.

Gogarty, along with Chu, is one of the few people Ryan is known to have an uneasy relationship with. His flirtation with the presidency saw him gain notoriety when he admitted to smoking cannabis and led to his reputation for being a “vision-type” politician, after he argued that a presidential campaign could broaden the Greens’ appeal.

“He played it very well. He did his whole ‘I smoked cannabis and inhaled it’ thing,” says one source, adding: “He got the visionary tag from that.”

The “vision thing” has been blamed for some colourful statements by Ryan that have led to ridicule, such as when he recently implored people to grow salad on their south-facing window boxes to help feed the country through the coronavirus crisis.

“It certainly is a weakness and a strength,” says one party source. “When he says something like that in the Dáil, people think: ‘Jesus, he is talking about bloody window boxes here’. I suppose he is trying to start from the start and talk to people about food, but it was all in the wrong context.”

“There is some skill there, isn’t there?”

To some of his detractors, he can be “passive aggressive”, as well as evasive when under pressure. “He is not particularly good at face-to-face conflict or confrontation,” says a source. “He doesn’t feel comfortable being confronted head- on with strong opinions.”

Another who has worked with Ryan says he has a “streak of determination and ruthlessness”. “Not politician ruthlessness in that he knifes people but that if he believes in something he will really, really work for it.”

Fianna Fáil ministers of the 2007-2011 era speak warmly of Ryan as a colleague and as someone who had a strong grasp of detail, even if his habit of taking copious notes at cabinet meetings unsettled them at times.

“He was very engaged in everything, even in other departments,” says one former minister, while another adds: “When [ex-minister for finance Brian] Lenihan was recommending particular proposals, most people would have accepted the rationale once they read the memo. He wanted to tease out the rationale.”

Dermot Ahern, then minister for justice, says Ryan and former Green leader Trevor Sargent “were among the best ministers we have had in recent times”.

“While other people in the Green Party were one-dimensional as regards their philosophy – they saw everything through the prism of climate – Eamon, while he was also a strong environmentalist, was conscious at cabinet there are other things to be considered.”

Scarred by their last experience in government, many Greens may be reluctant to enter office as the country once again faces crisis.

A Fine Gael-Fianna Fáil-Green coalition will have to take decisions to again rescue the Irish economy, and Ryan may find himself reaching for the cigarettes once more.

But perhaps the view from the top of Government Buildings will make those lonely times on the roof of Suffolk Street worthwhile.