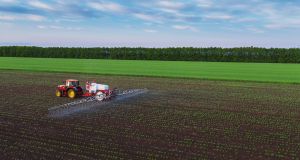 The targets are not yet legally-binding. File photograph: Getty

The European Commission has launched plans to halve the use of pesticides within a decade and cut the use of fertiliser and antibiotics in farming to protect the environment and help the bloc reach its climate goals.

The new proposals for the farming and food sector aim to increase organic farming, restore natural ecosystems and transform agriculture as the EU strives towards reducing carbon emissions to a net zero by 2050 to avoid catastrophic climate change.

Farmers are facing the sharp end of the consequences of climate change as they battle increasingly intense droughts and flooding, and are also major contributors to the process, as agriculture is responsible for over a tenth of the EU’s overall greenhouse gas emissions.

To pay for the overhaul, funding schemes will be launched through the Common Agricultural Policy and Common Fisheries Policy, health commissioner Stella Kyriakides announced.

“All transitions have a cost, but the cost of inaction would be even greater for all of us,” said Ms Kyriakides. “Without prospering farmers, we will not ensure food security. Without a healthy planet, farmers will have nowhere to farm.”

The targets laid out are to cut the use of chemical pesticides by 50 per cent, reduce fertiliser use by 20 per cent and cut sales of antimicrobials – a category of substances that includes antibiotics – for animal and fish farming by 50 per cent by 2030.

Pesticides are blamed for contributing to a collapse in bee populations across western Europe over the last 15 years, which EU politicians have warned endangers the 76 per cent of food production in Europe that depends on pollination.

The targets are not yet legally-binding and will be subject to an impact assessment.

Seán Kelly, member of the European Parliament for Ireland South and Fine Gael’s leader in the parliament, warned that some of the proposals seemed “unrealistic” and said farmers should be consulted closely.

“There is a big need to ensure that farmers are centre of this strategy, given they are the ones that will be tasked with achieving its goals,” said Mr Kelly.

“It is clear there is a lot of work ahead on these issues. But one thing is certain: our climate and environmental objectives must go hand-in-hand with the protection of livelihoods and rural communities.”