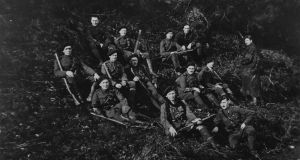 Men, possibly of the Royal Irish Constabulary (RIC), resting in the hills of Tipperary during the War of Independence, 1921. From the AE Bell Collection. Photograph: Hulton Archive/Getty Images

Michael Collins personally wrote to congratulate an IRA leader who pulled off a remarkable capture of a barracks in Co Fermanagh with the help of a Cockney and a parish priest.

Frank Carney, later to become a TD for Fianna Fáil between 1927 and his premature death in 1932, was commandant of the Enniskillen volunteers when, along with Seán Sheehan, he drew up plans for the taking of Belleek Barracks on September 5th, 1920.

It was “one of the most spectacular stunts” during the War of Independence, and the first of several planned captures, according to one witness statement in the Bureau of Military History from James Smyth of the Lisnaskea battalion.

Brigade Activity Records (BAR) for the Fermanagh Brigade (1 Midland Division) records how there “were no friendly policemen in the garrison” of Belleek, so the barracks “had to be taken by storm or ruse”.

“It was decided to adopt the latter plan,” the report records. Carney and three volunteers under him – John Maguire, Patrick Cox and Joseph Smyth (no relation) – set off from Enniskillen to Belleek “by boat and road”. Joseph Smyth was an ex-British soldier “with a pronounced Cockney accent”.

Because of this, he was chosen for the operation and disguised in the uniform of an Inniskilling Fusilier.

The ambulance at Ballyshannon Hospital in neighbouring Donegal was taken during a bogus call on the Sunday morning of the planned capture “at an hour when most of the garrison would be at Mass in Belleek”.

Smyth, in British Army uniform, sat in the front of the ambulance with the driver – identified as “McShea – Bundoran” – while Carney and the two other volunteers hid in the back.

The ambulance pulled up at the barracks and Smyth, carrying a large civil service envelope (supplied by Comdt Sheehan from Enniskillen Taxes Department where he worked), got out and knocked on the door.

“When the orderly opened the barracks door he reached for the service envelope presented by Smyth and was proceeding to open it when Comdt Carney dived through the open door,” the report records.

“In a few seconds the garrison of five or six police were disarmed and taken out on the street.”

Meanwhile, under a contingency plan for any delay to getting the ambulance to the barracks – and there was a half-hour delay – a “Volunteer T. Daly of Belleek” was placed on the village’s Catholic Church “with instructions to close all doors on the police and congregation if necessary.

“At the same time arrangements were made for an especially long sermon – through the help of the curate who was always very sympathetic and helpful to the cause,” the report states.

“Because of the delay in starting the operation and in spite of the long sermon Volunteer Daly had to close the church doors and keep the whole congregation and the police in the church after the Mass had finished. For this action he was subsequently arrested and imprisoned.”

Nonetheless, the operation was deemed a great success, arms were captured and the barracks burnt down by 40 local volunteers, under Comdt Sean Carty – a “very dangerous” operation in itself because of its proximity to military at Finner Camp.

The report notes that a man who took out the ambulance, whose name is not known, was dismissed from his job.

“It may be relevant that for many years afterwards the late Comdt Carney preserved a special personal letter of commendation received from the late General Collins for the manner in which this operation was planned and executed,” the BAR report adds.

The Crown should carry a warning that it is a work of fiction, British minister says
5