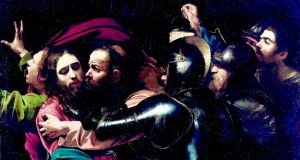 Lea-Wilson's widow, Dr Marie Lea-Wilson, came to prominence when a painting she purchased at an auction in 1924 turned out to be identified in 1990 as Caravaggio's masterpiece.

IRA volunteers in Wexford assassinated a senior member of the Royal Irish Constabulary (RIC) in revenge for his treatment of republican prisoners after the Easter Rising.

District Inspector Percival Lea-Wilson was shot dead on June 15th, 1920, on the streets of Gorey.

Lea-Wilson was allegedly witnessed by Michael Collins humiliating and mistreating Tom Clarke, one of the signatories of the Proclamation, in Rotunda Gardens after the Rising. Clarke was ordered to strip naked in front of the other prisoners, an incident which was depicted in the RTÉ drama Rebellion.

Collins got his revenge four years later when Lea-Wilson was gunned down in daylight after buying a newspaper at the railway station in Gorey.

Lea-Wilson’s widow, Dr Marie Lea-Wilson, came to prominence many years later when a painting she purchased at an auction in 1924 turned out to be identified in 1990 as Caravaggio’s masterpiece, The Taking of Christ. She gave the painting to the Jesuit Order in the 1930s in gratitude for its support for her after her husband was killed. The Jesuit Order gave the painting on an indefinite loan to the National Gallery of Ireland, where it is one of its most popular exhibits.

The shooting of Lea-Wilson is listed in the Brigade Activity Reports for the North Wexford Brigade (3 Eastern Division) as an operation sanctioned by IRA General Headquarters involving 10 men, five who participated in the shooting and five in scouting.

In his application for a military pension, Sean Whelan, an IRA volunteer in the county, stated he shot Lea-Wilson in the shoulder during the assassination, but added: “I was supposed to be the best shot and I was selected and it turned out I was not.”

Enniscorthy was one of the few places outside Dublin to see action during the Easter Rising.

Thomas (TD) Sinnott, a teacher who participated in the Rising, stated in the Brigade Activity Files (South Wexford Brigade, 3 Eastern Division) that the Enniscorthy units were regarded “pre-Easter Week as among the most earnest and determined in the movement and Pádraig Pearse appealed successfully to Enniscorthy on more than one occasion”.

The decision by Enniscorthy volunteers not to heed the countermanding order issued by Irish Volunteers chief of staff Eoin MacNeill was “proof of the sincerity and determination of the officers and men of the Enniscorthy units”.

The Enniscorthy garrison occupied the Athenaeum Theatre in the town on the Thursday of Easter Week and only surrendered on the following Monday after two men from the garrison were dispatched to Dublin to confirm that the Rising had failed. Though shots were exchanged, nobody was killed in Enniscorthy.

Wexford saw some of the most vicious fighting of the Civil War, with erstwhile comrades turning on each other with a savagery seen in very few counties. Twice as many people (50 vs 23), by some estimates, were killed in the Civil War in the county than in the War of Independence.

Anti-Treaty forces ambushed Free State soldiers on several occasions in 1922. They captured Enniscorthy Castle and took the surrender of the Free State garrison, but this only led to the saturation of the county by government troops. A train carrying National Army troops was ambushed outside Killurin on July 24th, 1922, and two soldiers were killed.

An unsigned statement from the 1st battalion of the South Wexford Brigade stated that a local priest attended to Private Patrick Horan, Sgt Edward O’Gorman and Lieut Thomas Jones before they were executed. “Afterwards, each soldier was perforated with bullets from a Thompson gun. Their legs and bodies were a mass of bullet marks.”