Seizure of £48 in dog tax among IRA operations in Cavan 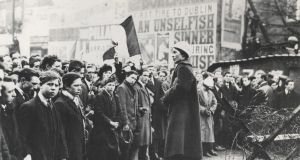 Come out, ye Black and Tans, come out and fight me like a man,
Show your wife how you won medals down in Flanders,
Tell them how the IRA made you run like hell away,
From the green and lovely lanes of Killeshandra.

The Black and Tans may not have had their worst experiences in Co Cavan but the IRA’s Killeshandra company was among those who were hostile to Crown forces in the county.

The border counties were significant during the War of Independence as they posed a potential threat to the Northern government, but the position on the ground was more complex than in southern counties.

In Cavan and Monaghan, republicans faced hostility on the ground, not just from a strong unionist minority but also the Ancient Order of Hibernians, creating a higher risk of spies and informers. When the Ulster Specials were added to the mix of British military, Black and Tans and Royal Irish Constabulary, the IRA had much to reckon with.

One of the better-known IRA operations in Cavan was an ambush of an RIC and Tans patrol at Swanlinbar in December 1920, during which a constable was killed and a sergeant was wounded. Another constable came out of his home in Swanlinbar on hearing the gunfire and was wounded in the arm.

The West Cavan IRA Brigade reported that three IRA members were arrested by the RIC following that ambush but all three had escaped following an exchange of fire.

A controversial operation by the West Cavan Brigade involved the destruction of Brackley House at Bawnmore on June 12th, 1921.

Historian Eunan O’Halpin notes the brigade records failed to report that the property’s owner, John Finlay, an elderly Church of Ireland clergyman, was killed by a blow to the back of the head in what O’Halpin suggests may have been an act of individual indiscipline.

Brigade Activity Reports for Cavan record hundreds of members were involved in operations including the capture of the RIC Barracks at Arvagh and the burning of Belturbet Military Barracks and of courthouses at Ballyconnell and Derrylin.

The IRA was also involved in arms raids, a raid on the income tax office at Belturbet, the seizure of £48 in dog tax, enforcement of the boycott of Belfast goods (ordered by Dáil Éireann in response to the victimisation of Catholics in the North) and the trenching and blocking of roads.

Members of the IRA and Cumann na mBan carried out essential support work for the republican war effort, including carrying despatches and supporting republican courts and enforcing their decrees.

IRA fatalities in the county during the War of Independence included John McCartney, who was shot when Crown forces surprised an IRA unit in the Lappinduff Mountains near Cootehill on August 5th, 1921.

From Norfolk Street off Belfast’s Falls Road, McCartney had worked as a labourer with the Dublin United Tramways Company. He had served with the British Army and was in receipt of a disability payment of 16 shillings weekly for suffering a gunshot wound to his hand.

McCartney joined the IRA, was a private with 1 Brigade, 3 Northern Division, D Company, and was in Cavan as a result of having volunteered for service with an IRA Flying Column.

His brother Charles was interned on HMS Argenta, used by the British as a prison ship.

Almost a year earlier, the IRA lost Joseph McMahon, a 25-year-old coachbuilder from Kilmaley, Ennis, Co Clare. He died near Cavan town on August 15th, 1920, when the bomb he was testing for use by his battalion exploded.

A 2nd lieutenant with C Battalion, Northern Division, C Company, he served from 1915 in Mullingar and Kilkenny before being posted to Cavan.

McMahon’s mother, Honora, received a £100 gratuity under the Army Pensions Act 1923 for his funeral, described in the records as “the largest ever to have left the town of Ennis”.

Her application in 1932 for a further sum as a dependant of her bachelor son was refused for reasons including she had a “good farm” of 28 acres which two of her surviving four sons were working. The other two were in America.

The third IRA fatality in Cavan was 21-year-old John McIntyre, from Lagan, Belturbet, who died while involved in an IRA operation to blow up a house on Tomkin Road, Belturbet, about to be occupied by British forces. He was killed by falling masonry and died instantly.

McIntyre, who held the rank of captain with 1 Battalion, G Company, West Cavan Brigade, was pre-deceased by his brother James, who had died of meningitis in 1919.

After James died, John worked James’ farm, home to his brother’s widow Mary and her son Hugh. As a result of debt, Mary was later compelled to sell the farm and got just £40 of the £130 sale proceeds. Claims for compensation over John’s death made by Mary and Hugh, along with McIntyre’s sister Kathleen, were all refused.