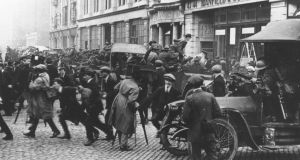 A convoy of Black and Tans and British soldiers arrives at the junction of Middle Abbey Street and O’Connell Street, Dublin, in 1921, during the War of Independence. Photograph: Sean Sexton/Getty Images

Michael Collins promised the IRA in the North back-up for a widespread wave of attacks designed to derail the nascent Stormont government but they were left “sadly disappointed” when no one turned up, according to a remarkable letter from volunteer leaders in Antrim.

The missive to Dublin from the former leadership of the 2nd Brigade, 3rd Northern Division (Antrim), lays bare a deep sense of abandonment and isolation felt by Northern nationalists, as volunteers in the south turned on each other during the Civil War.

Many years later, in 1937, the Military Service Pensions Board wrote to the brigade asking for details of its activities during the War of Independence for the purpose of awarding military service certificates and pensions.

Responding on April 28th that year, ex-officer commanding 3rd battalion Hugh McSparran and others are at pains to express their sense of having been “eclipsed or misunderstood” in Dublin.

“While we put forward these battalion statements as being our major operations, we would like your board to appreciate that even the simplest military movement in County Antrim was attended by extreme danger and difficulty owing to the over-whelming hostility of the imperial population, which embraced over 80 per cent of the inhabitants of our area,” they wrote. “Our men ran grave risks in being even identified with an extreme national movement. More so than any area in Ulster, we had to contend not only with a hostile civilian population, but with armed yeomanry , who had been organised from 1913 in Carson’s Ulster Volunteer Force and were well armed and trained.”

Furthermore, the quasi-military B Specials, which was set up in 1919, worked with the British military and police to make life “very difficult indeed” for Northern volunteers.

“Notwithstanding these obstacles, an efficient force was established and maintained which merited the expressed approval of General Collins at a convention in Dublin before the truce, when he asserted that the state of the movement in County Antrim compared favourably with any Brigade in Ireland, ” they added.

However, they go on to say the 1921 truce “never properly applied here” as the “homes of our men were being constantly raided and offence given to our people by British agents”.

The brigade leaders said they devised a plan so that a “useful blow could be struck at the Craigavon power” – referring to the first prime minister of Northern Ireland James Craig – “before it was definitely established”.

This involved “a widespread attack on Unionist points, civil and military”.

“In this decision we were encouraged and definite active assistance promised by the 1st, 4th and 5th Northern Divisions, which was agreed to by General Collins,” they wrote. “After details had been arranged, we struck on the 19th May expecting all divisions North and South of the Border to take part, but in this we were sadly disappointed. “We had started something which we could not hope to carry out successfully alone, and had taken up a position from which we could not withdraw.”

The divisions who were to back them up had become embroiled in the Civil War, they pointed out, adding they were left to try “offering what protection we could to our people until active hostilities died down”. A large number of Northern volunteers went south to the Curragh camp in Co Kildare until 1923, while the majority of men in the Antrim battalions were unable to ever return home, taking up work elsewhere in Ireland or emigrating.

“We never knew if our position was clearly understood in Dublin, as on account of the bitter struggle which was taking place in the South at the same time our position may have been eclipsed or misunderstood,” they wrote.

Despite their isolation, Antrim’s four battalions were relatively active, with engagements including a daylight raid on Ballycastle RIC Barracks in August 1920, the burning of barracks at Loughgiel and Cullybackey, as well as attacks on police stations at Cushendall, Martinstown and Rasharkin.