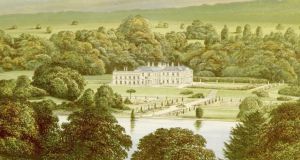 An ex-British soldier turned IRA volunteer who was shot dead while planning an attack on the stately home of the first governor of Northern Ireland had told his brother hours before his death that he “was going to see his girl”.

James McSorley (26) of Drumlegagh, Co Tyrone, was among about 20 volunteers preparing a raid on Baronscourt, the seat of the Duke of Abercorn, near Strabane, on July 8th, 1921, when they were surprised by the Ulster Special Constabulary.

The B Specials were dispatched at a late hour on the Friday night to Dunteague, a few miles from Baronscourt, an area “which has been for many years associated with murders and outrages when every other part of the country was peaceful”, a newspaper report from the time states.

The Crown forces noticed signalling going on and moved in on the rebels, who were in a hedge at a crossroads.

When they ordered the volunteers to halt and “hands up”, the IRA men started running away across fields in the darkness. The Crown forces claim to have come under fire “from a corn field on the right and a dark lane on the left” and “replied vigorously”.

Because of the darkness, it was “impossible to state what casualties were sustained”.

During a search after the firing ceased, McSorley’s body was found about 50 yards away beside a turf stack in front of a house owned by people named McDermott.

There was still “some slight heat in his body” and nothing was found in his clothes apart from a couple of red handkerchiefs and a pipe.

Medical evidence at a military inquiry in Omagh, where McSorley’s family were not allowed to cross-examine the witnesses, heard he was killed by a rifle bullet wound to the right breast.

It appeared he was shot from a considerable distance as there was no exit wound. The only other marks on his body were two tattoos.

The inquiry heard McSorley served in the British army’s South Irish Horse special reserve cavalry during the first World War and had been taken prisoner by the Germans for nine months.

His brother, who along with his father, Thomas McSorley, identified him, told the inquiry he last saw him just after 8pm that night – about three hours before he was shot dead.

Asked where he said he was going, his brother replied: “He told me that he was going to see his girl.”

Stopped in his car

According to the report, a Dr Lagan from Omagh was stopped in his car that night, while travelling with a young man called Cormac O’Neill of Dunteague.

Questioned about where he was going at about 1.30am, the doctor said O’Neill asked him to visit an old man called Neil Mimnagh, of Bessy Bell, a nearby small mountain in the Sperrins.

Suspicious, the Crown forces headed for Mimnagh’s house where they found the old man had died about 9pm that night. A Lizzie O’Neill, who lived with him, gave a statement that she did not send for a doctor and that “nobody could have sent for a doctor without my knowledge”.

Dr Lagan was searched and found to be carrying chloroform, bandages and lint. After being released, he was making his way back to Omagh when he was ordered to stop again, but he drove on.

“One or two shots were fired over his head and he thereupon pulled up and was again interrogated,” according to the report.

Brigade Activity Reports for 2 Tyrone Brigade (2 Northern Division) confirm the Crown forces’ suspicion that the IRA were planning to strike Baronscourt that night, while the Duke of Abercorn was there.

In her application for an army pension, McSorley’s mother Hannah said he was a timber planter at Baronscourt and he gave most of his weekly pay to her. McSorley joined the IRA in January 1919 and was attached to the Active Service Unit (ASU) of 2 Battalion, 2 Tyrone Brigade, 2 Northern Division under the command of Michael Gallagher.

The brigade activity report states his shooting was “an accident”.