The Roscommon files: Fears Black and Tans would burn town in revenge for ambush 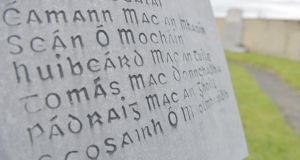 Thomas McDonagh, one of 41 IRA men who died during the War of Independence in Roscommon, remembered on a memorial outside Elphin. Photograph: Ronan McGreevy

A request to defend Ballaghaderreen from the Black and Tans was refused by IRA headquarters.

The town on the Roscommon-Mayo border was targeted in reprisals for the Rathra ambush of September 2nd, 1920.

At Rathra, a party of IRA men attempted to ambush an RIC patrol travelling from Ballaghaderreen to Frenchpark for the assizes (courts) in Frenchpark.

Rathra resulted in a protracted gunfight in which two RIC men, Constables Edward Murphy and Martin McCarthy, were killed along with one IRA volunteer, Capt Thomas McDonagh.

In reprisal, a party of Black and Tans from Boyle came into Ballaghaderreen and burned many prominent business premises in the town.

In the Brigade Activity Reports of the East Mayo 5 Brigade, the 1st battalion commandant James Henry sought permission to prepare a column to protect the town, fearing the Black and Tans would seek to burn it.

However, he needed the permission of IRA headquarters in Dublin to do so and sent a car in a dash to get the requisite permissions.

Permission was refused even when Henry undertook only to operate in the event of the enemy attempting to burn the town. Two of the biggest premises, Flannery’s and Beirne’s, were burnt down in the raid.

On the day after the town was burnt, Henry went to Ballaghaderreen to recover the body of McDonagh, which had been dumped in the middle of the town.

There were two other large ambushes in the county during the War of Independence, though it was far from ideal territory for large-scale engagements because of the flat terrain.

At Scramogue outside Strokestown on March 23rd, 1921, the IRA ambushed a lorry carrying British troops and RIC officers. Three men from the 5th Lancers and an RIC officer were killed.

Two Black and Tans were also captured. They were executed that night and buried in a bog. “We took two of them prisoners to teach us to work the Hotchkiss gun, but they would not and we did away with them that night,” Frank Simons, the vice officer commanding the South Roscommon Brigade 1921, told the pensions referee.

The Kilbride company (3rd battalion, South Roscommon Brigade, Western Dvision) of the old IRA in the county stated in the reports for the South Roscommon Brigade that the military tried to surround them after the Scramogue ambush, but “our intimate knowledge of the district and the coolness of our officers and men helped us to get past their lives and back to our column headquarters”.

Large numbers of men from the Kilbride and Kilgefin companies of the South Roscommon Brigade participated in the Four Mile House ambush on October 13th, 1920, between Tulsk and Roscommon town.

The men ambushed a Crossley tender travelling at speed and opened fire on the driver and the men inside. The tender crashed through a wall and kept going. The South Roscommon Brigade claimed that two RUC sergeants and three constables were killed in the raid.