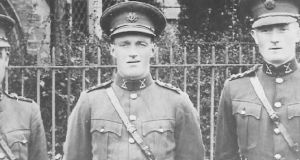 Former taoiseach Charles Haughey's father, John Haughey, was an active volunteer around the village of Swatragh.

The family of an IRA volunteer, shot by British soldiers and thrown 100ft off a bridge, spent decades pleading with the government for compensation to help them out of debts incurred bringing his badly mutilated body home for burial.

So paltry was the Free State gratuity offered to the grieving parents of William Canning, killed in action at the age of 18, that a TD living in Derry wrote a blistering rebuke to the authorities, saying more money would be paid for a greyhound.

Canning, from Ballymaclary, Magilligan, at the mouth of Lough Foyle, was taking part in an attack on RIC Barracks in Camlough, outside Newry, on December 12th, 1920.

Guarding a road block under local landmark the Egyptian Arch, which carries the Dublin to Belfast railway, the young draper’s assistant was shot with a machine gun by advancing British soldiers responding to the raid at Camlough.

Two other volunteers in the 4th Northern Division, Peter Shields and John Francis O’Hare, died later of their wounds from the ambush.

Canning’s pension file show his death plunged his struggling family into “dire circumstances” as he contributed most of £72 annual salary to their upkeep. His father James wrote to the Pensions Board that his second eldest gave “about £1 a week to me which together with a small unprofitable holding was my sole support for myself, wife and family”.

Canning had five other children at school, aged between five and 14 years, in 1921.

“I have a very small piece of bad land and find it very hard to live. So you can easily see how much I miss the keep I received from my son Willie,” he wrote.

In subsequent letters, he is increasingly anxious at the lack of response from the board as his financial worries deepen, adding that he “got into some debt” paying funeral costs “and owing to my poor circumstance I cant afford to pay it and support a large young family”.

“The parties who assisted me at that time are pressing for payment,” he added.

Several military, political, religious and business figures wrote to the board in support of the family’s claim over more than three decades.

An A McElwee, a general draper in Milford, Co Donegal, under whom the young Canning served his apprenticeship, recounted his role in the Egyptian Arch ambush as “English soldiers after shooting him threw his body over the bridge to a depth of 100 feet below.

“His people are in poor circumstances and it cost them a good deal of money bringing his body home and they have never since received any compensation.”

In 1924, a Rev Kerlin at Bellarena, Magillgan, wrote to the board that the volunteer’s father was “always an industrious, hard working man” on “an unproductive holding”. The death of his son was a “terrible blow to them” and when his remains were brought the 80-mile journey back to Derry “they had been so mutilated by machine gun fire that steps had to be taken to prevent even the father from seeing them”.

Having no money for the funeral, they had to borrow from a “sympathiser” and the loan still had not been repaid.

In January 1928, Frank Carney, a TD for Donegal living in Derry, wrote to the board complaining about a “gratuity” of £80 given to the family as a “ridiculously small sum”.

“In fact, there is far more value set at present on the life of a greyhound,” he wrote.

The board continually turned down pleas for reconsideration over many years.

In 1932, James Dillon, a Fine Gael TD and future leader of the party, wrote to the board asking again to look at the case.

By 1939, Canning’s mother Margaret had eight children and her husband was “an invalid, almost totally blind”.

By 1954, the executive council of the Pre-Truce Association of the IRA wrote to the then minster for defence to say Mrs Canning – then 78 years old – was in “dire circumstances” and that it can’t understand why her case was “overlooked”.

Mrs Canning herself wrote that she was now “living alone” and “my position is now desperate”. She suggests Frank Aiken, her dead son’s former IRA commander and then minister for foreign affairs, to vouch for her.

Former taoiseach Charles Haughey’s father, John Haughey, was an active volunteer around the village of Swatragh, where he was born. His wife Sarah was involved in Cumann na mBan.

His files mark him out as one of the most energetic IRA members in south Derry. In one attack on June 5th, 1921, RIC sergeant Michael Burke was shot dead and others seriously wounded in an ambush shortly after midnight on the barracks at Swatragh.

He received glowing references from others involved in the period. Maj Daniel McKenna, his senior IRA commander in the North, said John Haughey had “done his utmost to make British law impossible in his area”.

John Haughey was diagnosed with multiple sclerosis in 1933. Within two years, he was unable to walk and was so incapacitated by his illness that he could only mark his witness statement about his illness with an X in 1941. He died in 1947.