Carlow, 1921: The IRA shoot a pharmacist who wouldn’t close his shop

The Revolution Files: The owner refused to close for the funeral of Terence McSwiney 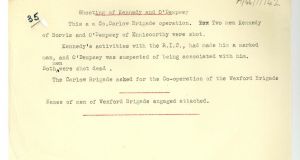 A prosperous shop owner, who refused to close for the funeral of Terence McSwiney, and the shop owner’s solicitor were executed by the Carlow Brigade of the IRA.

William Kennedy, a 44-year-old pharmacist in Borris, was told by the IRA in October 1920 that he had to close his premises for the funeral of McSwiney, the lord mayor of Cork, who died on hunger strike in Brixton Prison on October 25th, 1920.

The stand-off that ensued was to have deadly consequences for Kennedy and his solicitor Michael O’Dempsey, who was from Enniscorthy, Co Wexford.

The Borris company of the IRA sought a boycott of his premises. Kennedy, in turn, began to carry a pistol around with him. He also employed O’Dempsey to take out an injunction in the High Court against 10 men who were known republicans living locally.

After a brief truce for the Christmas period, hostilities began again in the new year, when one of the IRA men countersued Kennedy. O’Dempsey was abducted by the IRA and threatened. His offices were raided and the papers relevant to the case were stolen.

On March 15th, a party of IRA volunteers waited for Kennedy and O’Dempsey as they returned to Kennedy’s house on Main Street, Borris.

They fired at both men. Kennedy died immediately, O’Dempsey from his wounds two days later.

A brief account of the shootings is included in the Carlow Brigade files. The account states that “Kennedy’s activities with the RIC had made him a marked man and O’Dempsey was suspected of being associated with him. Both men were shot dead”.

In his statement for a military pension, John Hynes, the vice-commandant of the 4th battalion of the Carlow Brigade, stated that he was in charge of the operation which led to the deaths of the two men.

He also gave a statement to the Bureau of Military History stating that Kennedy had been consorting with the Black and Tans and that he had fired on IRA volunteers in the town.

The family of O’Dempsey protested his innocence and in February 1922 the Free State Government granted his mother compensation of £2,500 and an acknowledgement that he wasn’t a spy.

The sense of disillusionment with the process of applying for a military pension was laid bare in a letter from Christie Murphy, the former commandant of the 5th battalion.

Murphy apologised to the Brigade Activity Committee in trying to compile an accurate list of those who were involved in engagements. Just one of his former colleagues turned up to a meeting of the old brigade.

“I cannot get the details you want,” he wrote. “No one will attend a meeting or reply to any inquiries. I had a committee of 12. All their claims have been dismissed with the exception of two – myself and Peter Lamb. ”