Why are we so obsessed with anniversaries? 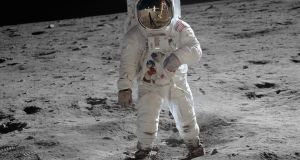 Are you one of those people who felt the chill hand of mortality on their shoulder when they heard this summer that it was 25 years since Portishead had released their epochal debut album, Dummy? Perhaps instead you felt the warm glow of a cherished childhood memory as the 50th anniversary of Neil Armstrong’s first steps on the moon was commemorated.

Well brace yourself for more blasts from the past. Twenty-five years ago this week, Quentin Tarantino’s Pulp Fiction opened to dazzled audiences in American cinemas. And next week, it’s a quarter of a century since Friends began its first series on NBC. We’re still feeling the aftershocks of both.

I haven’t finished. Next Friday, it will be exactly 50 years since John Lennon’s announcement that he was quitting The Beatles. More importantly, yesterday was the 50th anniversary of the first episode of Scooby Doo. And there’s plenty more semicentennial (yes, that’s what they’re called ) landmarks on the way, from the launch of Sesame Street to the founding of Arpanet, the precursor to the internet.

Nostalgia now forms an essential part of the diet offered by broadcasters, publishers and digital companies

Nor is there any shortage of tech-focused 25-year anniversaries (or, as no one calls them, quadtranscentenaries), from Jeff Bezos’s decision to name his fledgling online business Amazon to the arrival of the very first Playstation. But why restrict yourself to quartered chunks of 100 years? You can’t fail to have noticed that this month we are remembering the 80th anniversary of the outbreak of the second World War. Meanwhile, thinkpieces are undoubtedly already in gestation for the 30th anniversary of the fall of the Berlin Wall this November.

Anniversaries come so thick and fast these days that this newspaper barely had time to complete its series marking 50 years since the start of the Troubles before it launched its coverage of the 25th anniversary of the IRA ceasefire. The effect was rather hallucinatory, as if time had collapsed in on itself in the manner of a postmodern novel or an episode of The Good Place (which, incidentally, launched three years ago next Thursday).

Where does this remorseless drive to commemorate come from? There are several sources, some depressing, some understandable. Chief among the former is the industrial commodification of nostalgia, which originated in advertising before bleeding into the entertainment business and then across the entire media (including social media, which has elevated the whole “where were you on this day...” thing to an underlying structural principle). Nostalgia now forms an essential part of the diet offered by broadcasters, publishers and digital companies. And for good reason: it’s cheap to produce, it’s popular, and it appeals to the emotions in a way that’s perfect for the clickable, shareable moment in which we now live. It also makes particular sense in ageing societies that, judging by electoral trends, harken back to a mythical Golden Age.

That’s the bleak view, but there are counter-arguments. One is that, when it comes to culture, especially popular culture, these random markers of the passing of time allow us to revisit works that were either overlooked in the moment they were made or have proved in retrospect to have had a lasting impact.

Another is that, in the face of an apparent decline in the teaching and knowledge of history, marking these somewhat arbitrary milestones allows us to explore, reflect on and learn from the past. That has certainly been the motivation behind our own Decade of Centenaries, which at its peak in 2016 saw an impressive combination of public ceremonial and historical interrogation. If it’s gone off the boil in the three years since, that may simply be due to the difficulty of keeping the energy level up over such a long period of time. But it might also be a symptom of the other problem with marking too many anniversaries: they’re always in danger of becoming rote exercises, dull calendar entries to be observed whether we want them or not.

All the more reason, then, to praise the most impressive commemorative exercise of the year, The New York Times’ 1619 Project, marking the arrival of the first enslaved Africans on the landmass of what is now the US. It takes that event as the starting point for an in-depth consideration of all aspects of American history – political, social, economic, cultural – through the prism of slavery. Intellectually provocative and deeply argued, it proposes an alternate history of the US as a country shaped not by the Declaration of Independence and the Enlightenment but by race-based chattel slavery. In the process, it has made some people angry (no bad thing) and caused some other people to think differently about what they thought they knew about their past, present and future. Which is surely what an anniversary is supposed to do.