The origins of skateboarding in Ireland: ‘It’s not a craze or a childish whim’

From the archive: The skateboarding craze took up a number of column inches in the late 70s 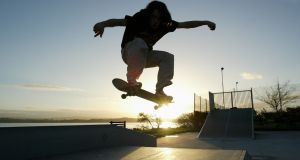 A skater at the board park in Co Galway. File photograph: Joe O’Shaughnessy

The first person to write the word “skateboard” in The Irish Times was Maeve Binchy, in August 1977, in a feature about the decline of Brighton in England as a seaside resort: “There are bits of concrete where skateboards whizz around, and miles and miles of beach, stoney and shingle, not the sands of dream postcards, but at least it’s the beach, and all that much is free.” That October, an advertisement appeared in the newspaper: “SKATEBOARDS, Large quantities available. Agents and wholesalers required. Telephone Shaftesbury (England) 3913.”

In November 1977, the River Lagan in Belfast featured in Fionnuala O’Connor’s Inside Belfast column, in which she noted that near the newly built Shaw’s Bridge on a dry and frosty Sunday, “A flock of young skateboarders climbed the slope from the river to the Malone and ritually swished down, climbed again, swished again: God’s children, each and every one.”

A report by David McKittrick from Castlereagh Borough Council, which covered the suburbs of south-east Belfast noted: “Back inside, the councillors find themselves cast as reluctant killjoys. The landscaped walk at Newton Park, it turns out, is a perfect skateboarding run. Youngsters are swooping and swirling about at a great rate. But the kids are now coming from all over, becoming a nuisance and creating continual noise which is very hard to tolerate. Agreed: That obstacle be dug into the ground.”

By the time Christmas features were being written, skateboarding was very much top of the list. Marie Mullarney’s article on December 5th, 1977 - This years craze in toys - got straight to the point: “We may as well get this year’s craze out of the way first,” she started. “Skateboards cost from £11 to £50 each. Nothing less than £14 is worth buying, I’m told. But do not suppose you can get away with a mere £11. Riders of skateboards require protection for skulls and elbows; board, helmet and pads will run you up to £25.”

But it was Nell McCafferty who offered the greatest insight into the burgeoning sport, past time, subculture and lifestyle in Ireland with a piece headlined The skateboard is upon us, on December 9th, 1977.

McCafferty took the topic seriously, placing skateboarding in a context of its 1960s growth in America, to how places such as Derry were responding to kids skating in the streets.

“Skateboarding is not a craze or a childish whim, though thousands upon thousands of Irish children will be practising it after Christmas,” her article began. “The skateboard, invented in America in 1965 [that date is more than a little sketchy], has become an instrument of serious professional sport, combining the thrill of surfing on dry land with the art form of the gymnast. It can be as speedy as motor cycle racing and nearly as dangerous. It can be as slow and dreamy as going for a bicycle ride.”

McCafferty cited the contagious impact of skateboarding being shown on British television and how the Great Outdoors shop on Dublin’s Chatham Street had started selling boards. Meanwhile in Derry, McCafferty wrote about how the city council there had decided to build to ramps in both of its public parks to cater for the craze: “There’s going to be thousands of these people wheelin’ about the streets,” she quoted a “worried councillor” as saying. “We’ve got to give them ramps.”

In 1978, Clive Rowen established Clive’s on Hill Street in Dublin. The impact of the shop and the scene it birthed was explored in the 2014 documentary Hill Street. (Rowen’s younger brother Peter, also a skater, was on the cover of U2’s Boy album. Other brothers include the artist Guggi and fellow Virgin Prunes member, Strongman). That documentary details the growth of the scene here, which included a visit by Tony Hawk and the Bones Brigade team to the Top Hat in Dun Laoghaire in the 1980s.

Today, the public plaza at the edge of the Grand Canal in Portobello in Dublin is a key hub for the skateboarding community. Yet like many places in the capital, its future is under threat due to hotel development on the site.

While Clive’s closed long ago, he now runs Skate City in Temple Bar; nearby there is also High Rollers,  a thriving skate shop and team, which along with indigenous skateboard brand Killing:Time, the Irish skate magazine Goblin, and several artists and film-makers contribute to what remains an underground, but expert scene.