Iveagh Markets ‘unsafe’ and in ‘advanced state of dereliction’ 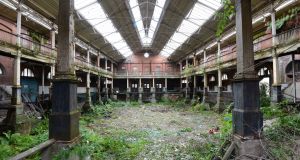 Dublin’s historic Iveagh Markets are “unsafe and in an advanced state of dereliction” due to “serious neglect and several damaging interventions”, a report commissioned by Dublin City Council has found.

Howley Hayes conservation architects has advised the council more than €13 million is needed in “essential structural repairs” to what it says is “one of the most significant buildings ever constructed in Dublin” and a “central part of the Guinness legacy”.

Temple Bar hotelier and publican Martin Keane secured planning permission in 2007 to redevelop the Edwardian market in the Liberties, following a long-term lease deal agreed with the council in 1997.

That permission expired in 2017. However, Mr Keane said he will be in a position to submit a fresh application for a €100 million development of the market and surrounding area within the next two months.

In September 2017, city councillors voted to take back control of the market from Mr Keane. The council subsequently commissioned the condition report on the market from Howley Hayes.

The report, issued to councillors this week, states the “build quality” matches that of “any civic building in Dublin”, but the building has fallen into decay “and many of the most recent interventions have been unsuccessful and at times damaging”. Parts were “now unsafe”, it said.

“It is of the highest level of urgency that the future of this important building is secured.” Howley Hayes said €13 million would only cover essential repairs.

“As the building is unique in Dublin and also of considerable significance in a European context every effort should be made to ensure it is fully restored and returned to a suitable and viable new use as soon as possible.”

The council’s head of planning, Richard Shakespeare, said the council did not have €13 million in its budget for this work.