From the Archive: Proposals to remove Ireland from the National Council of Women of Great Britain and Ireland were met with resistance 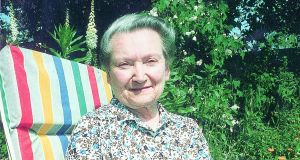 Hilda Tweedy was chair of the Council for the Status of Women, established in 1973.

Page seven of The Irish Times on Wednesday, October 8th, just happened to be fascinating. There was a story about a proposed site for “the erection of a Wireless Broadcasting Station in the Free State”, which would become 2RN, broadcasting from Little Denmark Street in Dublin (the Marconi transmitter was at McKee Barracks in Cabra near the Phoenix Park), and eventually named RTÉ. There was news about the JR Campbell case in England, where Campbell, the editor of the Communist Workers Weekly, was accused of attempting to incite the military to mutiny. The subsequent election two weeks later was lost by Labour.

But even among those stories clambering for space, something else catches the eye. ‘Women’s National Council: Ireland Severed From Parent Body: Dublin Delegate’s Appeal.’ The report was from the annual conference at Brighton of the National Council of Women of Great Britain and Ireland, where an amendment was passed “to the Constitution deleting the name of Ireland from the title of the Council, in view of the changed historical conditions in this country. The amendment was vigorously opposed by some of the Irish delegates.”

The amendment was moved on behalf of the executive committee by May Ogilvie Gordon. Ogilvie Gordon was a Scottish palaeontologist, women’s rights activist and politician, and the first woman to be awarded a Doctor of Science from the University of London (and receive a PhD from the University of Munich, having initially been refused from the Berlin University due to sexist admission policies.) At the conference, she said that “in accordance with the new status of Ireland, steps were taken by the Dublin branch to create a National Council in Ireland for itself. Those steps culminated in success, and the formation of the Irish Council had been accepted by the Executive of the International Council.”

In Britain, the National Council of Women was initially titled the National Union of Women Workers, and founded in 1895. In 1918, it changed its name to the National Council of Women of Great Britain & Ireland. The name-change removing Ireland from its title is generally cited as 1928, but it’s clear from this article that this decision was in fact made in 1924, more than three years after the Irish War of Independence, and a year and a half after the Irish Civil War. To say the country was in flux would be a champion understatement, and it’s also clear that organisational vacuums once filled by British entities were now being filled by Irish ones.

Some Irish delegates, particularly those of the Alexandra College Guild, however, were not happy. Ethel Watson, the honorary secretary of that guild, urged that the severance of Ireland from the organisation be postponed, “She said that there was what might be termed a skeleton National Council of Women in Ireland. It was only in embryo, or perhaps she should say in an initial stage of development. There was no president, and merely a small committee in Dublin and very few representatives from other centres in Ireland. At present, that Council could in no way be a source of strength to its affiliated societies. They urged that they should not be cut off from the present Council before the fledgling had begun to function.”

Others agreed with Watson, who read a statement from Miss HM White, president of the Alexandra College Guild, which said, “I feel that Ireland at the present crisis specially needs any ties that will bind her to Great Britain, and that all existing links should be strengthened rather than weakened.” Other Alexandra College Guild members, including a Mrs Grenville and a Mrs Crookshank, wanted things to be postponed, “All we are asking,” Crookshank said, “is to wait, and none of us knows what will happen in Ireland even in the next few months.” But Ireland’s name was deleted from the organisation’s title, although the council president, Mrs George Morgan, said that, “The feeling of sisterly affection was strong in the Council, which would do everything that it could to help Ireland through her difficulties.”

The National Women’s Council of Ireland was established in 1973, initially titled the Council for the Status of Women, as an umbrella group for other women’s groups, and chaired by Hilda Tweedy from the Irish Housewives Association.

At that conference in Brighton in 1924, another motion passed was to place clubs under magisterial license and supervision. The motion was proposed by Lady Selborne, who was met with “a running fire of interruption”. Her reason for opposing the motion? “Clubs, she said, “did more good than harm.”