‘We are absolutely on the racks. This week will see the end of us’

The Dublin files: Those who fought in the Rising, and their families, struggled to get a military pension 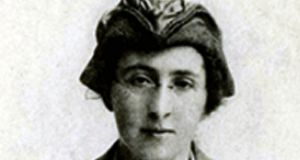 Margaret Skinnider was one of more than 200 members of Cumann na mBan whose applications are contained in the archive.The files outline the women’s injuries, the risks they took and their heavy involvement in military action during the 1916 Rising and the Civil War.

The Irish Citizen Army assault on St Stephen’s Green during Easter Week 1916 was described as “absolute suicide” by a senior IRA commander.

Comdt Alec Thompson, who served in the Easter Rising and went on to become quartermaster general of the IRA, gave a withering appraisal of the actions of the army in his testimony on behalf of 4th battalion (Dublin Brigade).

The Irish Citizen Army, under the command of Comdt Michael Mallin with Constance Markievicz as his deputy, occupied St Stephen’s Green on Easter Monday 1916. They dug trenches in the Green.

They were immediately overlooked by British soldiers, who used the high buildings around to snipe at those occupying the trenches in the Green. A day later, the contingent of about 300 men and women fled to the College of Surgeons on the Green to continue the fight.

In response to a question from the Pensions Board examiner that the ICA had got a “bad smashing up”, Thompson responded: “They should have known that before they went into it. There were things done in that period that you would not do in the succeeding years.”

Thompson testified to the board on behalf of Robert Briscoe, who would later go on to become a Fianna Fáil TD and lord mayor of Dublin.

Briscoe, who was Jewish, alleged he had been the victim of anti-Semitism. In a letter to the Pensions Board, he wrote of being subject to “accusations, insinuations and unfair suggestions made about services given freely, readily, and without hope of a reward and at a very great personal risk”.

Briscoe was the son of Jewish immigrants to Ireland and became one of the most committed republicans during the War of Independence and the Civil War, where he took the anti-Treaty side. In 1920, he was sent by the provisional government to Germany to buy arms because he spoke German.

Briscoe said he never personally benefited from any transactions carried out between the provisional government and his family’s firm. “In my own family, I was all the time being asked to drop this foolishness, that I was endangering the whole family.”

At the College of Surgeons Margaret Skinnider was shot and wounded while in command of five men, but she was denied a pension because the law was “applicable to soldiers as generally understood in the masculine sense”.

She was a primary school teacher in her mid-20s when wounded on April 26th, 1916, the Wednesday of Easter Week. Skinnider’s mission was to “destroy houses in Harcourt Street to cut off enemy approaches”. She applied for a pension in 1925 but, despite her injuries and level of involvement, the legal adviser to the army pensions office wrote he had “no doubt” her application “cannot be considered under the act” even though, he said, the words referring to masculine could be interpreted as feminine. After repeated rejections, her pension application was finally approved in 1938.

James Connolly’s daughter Nora Connolly O’Brien struggled to get a military pension from the State despite her father’s status as a signatory of the Proclamation. The Connolly family lived in extreme poverty after their father died. Nora wrote to a friend: “We are absolutely on the racks. This week will see the end of us unless I have something definite to count upon.” She was eventually awarded a paltry pension of £29.7.6 a year. Her mother, Lillie, also struggled financially in the years after independence.

The State stepped in to provide for the orphaned children of another Proclamation signatory Thomas MacDonagh. A year after MacDonagh was executed for his role in the Easter Rising, his widow Muriel Gifford drowned in Dublin Bay.

The State paid the fees for MacDonagh’s son, Donagh, and daughter, Barbara, to attendsecondary school and university.

A full list of those involved in both Bloody Sunday in November 1920 and the burning of the Customs House in May 1921 are contained in the brigade activity reports for the Dublin Brigade.

James Bird, one of Michael Collins’s squad, gave a full list of those who had participated at Morehampton Road in Donnybrook on Bloody Sunday.

James Paul Norton was one of six members of Michael Collins’s Squad involved in the shooting dead of Lieutenant Donald Lewis MacLean and a suspected informer Thomas Herbert Smith who was the owner of the house.

Norton wrote to the pensions’ board about the effect that his involvement had on his mental health.

“I took part in the raids on intelligence officers on Sunday, November 21st, 1920 and was one of the firing squad. The strain of that operation played on my mind and nerves”.

He was arrested after single-handedly trying to capture a tender of armed British troops four days before the truce. He was later committed to Grangegorman mental hospital. He was diagnosed with manic depressive psychosis and spent the rest of the life in and out of Grangegorman.

TV guide: 25 of the best shows to watch this week
9