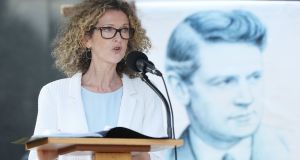 Michael Collins and Arthur Griffith have been remembered at their annual commemoration at Glasnevin Cemetery.

One of the oldest commemorations in the State saw the raising of the national flag at the Sigerson Monument by the Defence Forces, and a wreath-laying ceremony at the graves of Gen Michael Collins, Arthur Griffith and Eamonn Duggan.

The annual oration at Collins’s graveside was given by celebrated author and journalist Justine McCarthy, who used her speech to talk about the “new Ireland”, and the issues the State faces almost 100 years after the death of both men.

She said: “What would they say about the people sleeping in the streets; the hospitals straining at near-breaking point; the communities plagued by violent gangs; the asylum-seekers who have spent years in a dehumanising direct provision system; the exorbitant and adversarial legal system that denies many citizens access to justice; the banks rescued from extinction by the citizens and that now pay no tax on their multi-billion euro profits; and a public service that fritters away billions of euro on trophy infrastructural projects, but can’t find the price of a postage stamp to notify women if they have cancer growing inside them?”

Ms McCarthy also noted the absence of women’s contributions in recorded Irish history and the wider running of the State.

She said that today 78 per cent of Ireland’s TDs are men, and that there is not one female member of the joint Oireachtas Committee on European Union Affairs as the country faces Brexit.

“The consequences of women’s exclusion from decision-making are summed up in the catalogue of medieval horrors to which they have been subjected in the lifetime of our State,” she added before listing historical abuses of women in Ireland including those in Magdalene Laundries and Mother and Baby Homes.

The prayers at the graveside were led by Geraldine Dalton.

Ms Madigan said it was important to continue to remember the contributions made by Collins and Griffith on the path to independence.

“2019 marks the centenary of the foundation of Dáil Éireann, one of the most significant events in the Decade of Centenaries,” she said.

“We recall the immense contribution that both men made as members of the Dáil and the cabinet.

“Today’s commemoration provides us with an opportunity to reflect upon that contribution to our enduring parliamentary tradition.”

Following the wreath-laying ceremony and readings, a minute’s silence was held, followed by the sounding of the Last Post and Reveille.

The Defence Forces also participated in the commemoration ceremony, with the Sliabh na mBan armoured car on display.

The Sliabh na mBan formed part of Collins’s convoy which was ambushed on August 22nd, 1922, at Béal na mBláth in West Cork, resulting in his death. – PA