Get ready for the Galway International Arts Festival

This year’s festival boasts a full moon, and a garden, theatre, gigs, talks and thoughts 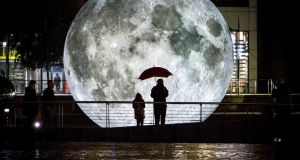 The Irish summer festivals are well under way, and one of the biggies, Galway International Arts Festival, kicks off two weeks of action on Monday. The 41st festival has a bigger line-up this year, with more theatre, more gigs in its Big Top tent, and an expanded First Thought Talks at the weekend.

Direction at the city’s European Capital of Culture 2020 is having a bit of a wobble at the moment, but Galway’s arts festival is moving into top gear this weekend: the box office is in full flow, rehearsals are in the final stages for its six world premieres and five Irish premieres, and Turner Prize-nominated artist David Mach and his team are in town working on his festival commission, Rock’n’Roll. This will be one of Mach’s gargantuan newspaper installations at the Festival Gallery on Market Street, using 190,000-plus newspapers weighing over 20 tonnes, as well as a boat and other large objects.

The festival’s artistic director, Paul Fahy, is looking forward to “welcoming amazing artists from all over the world” including President Michael D Higgins, who will be on home turf speaking at First Thought Talks, which features academics, activists, architects, artists and authors exploring the concept of “Home”.

This year there’ll be a Festival Garden in Eyre Square (noon-10pm from Wednesday), promising a chilled-out atmosphere, with a lounge serving food and drinks, occasional DJs, live sets from festival guests and pop-up performances, as well as an information centre and additional box office.

Theatre includes the festival’s production, with Jen Coppinger, of the elegy Incantata by Paul Muldoon, starring Stanley Townsend and directed by Sam Yates. Also at the last stage of production is Irish National Opera’s Gluck’s Orfeo ed Euridice, directed by Emma Martin; two new plays from Druid (Furniture by Sonya Kelly and Shelter by Cristín Kehoe); Baoite/Bait by Darach Mac Con Iomaire (an Abbey commission by An Taibhdhearc and the festival); Decadent’s Port Authority by Conor McPherson; and Galway Youth and Community Theatre’s production of Wit by Margaret Edison, both directed by Andrew Flynn. And recordings of Donal O’Kelly’s voice are under way for Enda Walsh’s immersive installation, Office 33A.

Also on the way to Galway is the 90-strong China National Traditional Orchestra for its Irish debut. The festival’s street art and spectacle includes Museum of the Moon, a giant moon featuring detailed Nasa imagery of the lunar surface by artist Luke Jerram, running through the festival at NUI Galway’s Human Biology Building, the new home for the School of Medicine at the university.

Three Australian shows include the jaw-dropping acrobatic virtuosity of Backbone from Gravity & Other Myths; Circa’s acrobats presenting Humans, and a humorous and sensory production, Patrick White’s The Aspirations of Daise Morrow.

Immersive theatre and installations include the Edinburgh Festival hit Flight, adapted from Caroline Brothers’ novel Hinterland (promising an “exquisite, intimate, magical and spellbinding show”); and an exploration of the human cost of the war in Syria, in Tania El Khoury’s interactive Gardens Speak. Big top gigs range from Caribou to The Flaming Lips to Amadou & Mariam.

There’s also an impressive and expanding Galway Fringe Festival programme running alongside, exploring “vivid and unique characters pushed towards the edge, told with humour, sadness and humanity”. From July 15th-30th, it includes theatre, visual art, music, film, comedy, and spoken word all over the city.