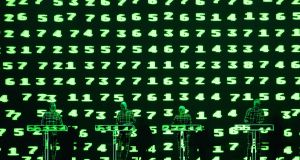 A sea of bopping 3D glasses greeted Kraftwerk as the teutonic techno troupers brought their precision-engineered greatest hits set to the Live at the Marquee festival in Cork.

With a landmark run of records in the 1970s, the Düsseldorf quartet more or less invented modern electronic music. But, 40 years on, they have themselves become somewhat of a museum exhibit. In this age of smartphones and Facebook algorithms, Kraftwerk’s vision of an uplifting technological tomorrow feels faded and quaint, like an old Star Wars toy from your childhood.

Both their prophetic qualities and a retro sensibility harking back to ZX81 personal computers and brick-sized mobile phones were on display through this rapturous concert. The onward march of machine intelligence was an inevitability to which the group, positioned as ever behind their four iconic”workstations”, appeared uncannily attuned back when robots were strictly the stuff of science fiction. Androids-have-feelings-too anthems such as The Robots and Computer Love – highlights of their two-hour set on Leeside – imagined a far-flung time in which human and artificial person were joined in logical harmony.

The future obviously hasn’t played out exactly as expected. Kraftwerk may have forecast machines that do our thinking for us, but they never saw the Twittersphere coming, let alone mobile phone addiction or Cambridge Analytica (with Computer Love they did, however, envision a dating scene mediated by Tinder). For that reason watching them in 2018 – via 3D specs handed out at the entrance –  was like sitting through a musical based on the BBC’s Tomorrow’s World, with the lead role inhabited by Ralf Hütter, the group’s only remaining member and creative leader, who drily surveyed the audience from his position to the far left of stage.

Yet this retro-future wonderland was persuasively conjured in Cork as they proceeded, with dignity and no little twinkling, through Autobahn and The Model – glittering machine odysseys that peeled back the circuity to uncover the beating heart beneath.

There were some re-calibrations from last year’s performance at Bord Gáis Energy Theatre, Dublin. A flying saucer that drifted across the 3D video screen during Spacelab no longer wended its way down the Liffey.

Instead it hovered between the iconic twin peaks of Cork’s North Cathedral and Shandon steeple, earning a rumble of approval from the crowd (though that may have had something to do with the fact that Croatia had just taken the lead against England in the World Cup semi-final).

The biggest surprise was the absence, during the Robots, of the dancing dummies Kraftwerk have been hauling round the world for the past decade and a half. Instead, this valentine to artificial life was performed by the musicians – greying, not un-pudgy and in their late 60s.

The machine had become briefly flesh and blood and seeing these four older gentlemen in tight-fitting jumpsuits delivering their best impersonation of robot aloofness was a powerfully human moment.