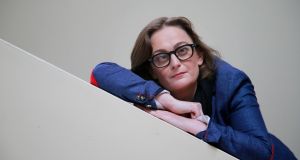 Sitting on a geometric hotel sofa, among the marble and leather indicators of contemporary minimalism, the writer and performer Sonya Kelly offers some reassuring words. “It has clean lines,” she nods when her interviewer has confessed to an unhealthy recent obsession with mid-century furnishings. “You get to a point in your life when all you want are clean lines. There’s enough clutter in your brain.”

Kelly’s hilarious new play for Druid – three brief plays, actually, about “tables, chairs and people” – might not be quite so forgiving. Alive to our fetish for commodities, and the way people project their feelings or self-image on to otherwise utilitarian things, it is called Furniture, providing a wickedly smart relationship comedy that is short and suite.

Not untypically for Kelly, who often seems to regard the world through amused or startled eyes, it was inspired by a crisis: “a fight or flight moment”, she recalls, in the Irish ambassador’s residence in Paris a few years ago.

“Prince Albert of Monaco was there,” she recalls. “And I went, ‘Ooh, we’re both Kellys. Ha ha!’

“The event was a charity fundraiser, and Kelly, then in residence at the Centre Culturel Irlandais, had been invited as a conversation piece. “They were selling all these prints, at €5,000 a pop,” she recalls, “and asked ‘What will we put you down for?’ ‘Oh, Nothing! I’m just here for the free champagne’.”

If you keep pulling that thread, you end up with a pile of wool and not a jumper anymore

In the corner of the room was an original Eileen Gray chair and Kelly leaned towards it. “Ah! Don’t touch that!” someone reprimanded her. She was stunned.

“On the surface it’s quite an innocuous remark, but it’s an index to an entire value system. If you keep pulling that thread, you end up with a pile of wool and not a jumper anymore. I literally ran home that night and started to work on a conversation that would unravel a relationship.”

The result marks a significant change in Kelly’s writing. Her most recent work for the stage was How to Keep an Alien, a cheering account of the ravelling of her relationship with an Australian-born stage manager (they are now married). Following The Wheelchair on My Face, a wonderfully funny and touching history of her myopic childhood, which also toured internationally to great acclaim, it marked Kelly out as an accomplished monologist. But, by the time of her run-in with Eileen Gray, Kelly had decided to stop talking to herself.

“When Waking the Feminists happened, in 2015, I remember sitting in the [Abbey theatre] auditorium thinking, ‘OK, what are you going to do? They’re talking to you, Sonya. What is it you’re going to do?’ And I remember thinking, I don’t think the answer is to write another autobiographical play.”

If Waking the Feminists asked writers whose stories get told and whose stories they should tell, Kelly’s response was to look beyond herself, to include more voices – not a small task for someone who had never previously written for more than one.

“I’ve always been so seduced by beautiful dialogue,” she says. “The tennis rally; the serve and return.” While in Paris, in an effort to understand it, she began to read ravenously – the plays of David Hare, the psychological writing of Steven Pinker – and she came to a characteristically arch conclusion. “We make sounds to get stuff from each other,” she tells me. “As long as you remind yourself of that, you can take any type of negotiation and put the lyricism of theatre on top of it. David Hare is brilliant at it. It was such a relief to discover that dialogue doesn’t have to be naturalistic. Alfred Hitchcock says ‘Drama is real life with all the boring bits cut out’.”

That is clearly evident in Furniture, written in a flash two years ago, submitted on spec to Druid’s call for new works, and now presented, in repertory, with Christine Kehoe’s new play Shelter, as part of the Galway International Arts Festival. Kelly’s play is the kind you will find yourself quoting from afterwards; as with tasteful mid-century furnishings, it contains some sensationally clean lines.

In the first play, Bibendum, the tensions between a couple in early middle age flare over an iconic Eileen Gray chair at an exhibition launch – Don’t touch it! In the high comedy of a couple arguing discreetly in a public space, Ed, a punctilious artist, and Alex, a bluff medic, bring up an historical grievance involving a museum’s security sensors. “Oh god, what have I done?” Alex mocks Ed’s embarrassment. “I have entangled myself with a woman who beeps.”

In both her writing and her conversation, Kelly brims with such lines: pithy, pristine, precise. “Thou shalt not bore,” she says of the play’s brevity. “If you bore them, they won’t come back.” Of her subtle references to politics and psychology, skittering just beneath the surface of the dialogue, she’ll say, “Never stay too long on a subject. They’re all Lilly pads. Keep bouncing or you’re going to sink.” Discussing the depersonalisation of the digital age – a pet peeve and a subtle concern of the play – she doesn’t waste a word. “We’re biological entities,” she says. “We’re dirty, people! Bits of us come off. But we’re at the point where we’re doing battle with the idea that we’re biological entities at all. We’re datafying ourselves and deifying ourselves.”

In La-z-boy, the second and funniest of the three plays that make up Furniture, two women who have met via a dating app hurriedly move in together. Stef, an affluent professional who dreams of “chrome that has never known a fingerprint… boutique teak and the cool, clean feel of exemplary upholstery”, now discovers her lover’s taste, as the scattered Dee hauls in a recliner that Stef describes with abject horror. “It looks like the Michelin Man shot Barney the Dinosaur, skinned him, and wore him like a dress.”

If the amperage of the play flows between those positions, between an aspiration for a clean-lined, spotless existence and a reckoning with the mess of real life, where does Kelly herself sit? Her process, for instance, is meticulous, scheduled and strict, and her characters’ repartee can come close to epigram. “I don’t match your furniture,” Dee says, shocked to realise that she has been selected, online, as surely as one would order a reproduction Eileen Gray E-1027 side table. “Oh god, I feel disgusting,” says Dee. “I feel so Ebayed…”

I ask if Kelly is closer to a Stef or a Dee. “I am closer to a Michael,” she counters, referring to a gentle, put-upon character in the third piece, whose flamboyantly gay, ailing uncle, George, is trying to bequeath him with a tatty chaise longue seeped in history. “This chaise longue came right out of Danny La Rue’s dressing room at the Palace Theatre,” George insists. “Barbra Streisand sat on it. Rudolph Nureyev sat on it. Judy Garland passed out on it.”

Michael, intriguingly, is the character who has caused most issue among the cast, unsure about the reasons behind his stoicism. But Kelly identifies with him implicitly.

Kelly has some experience writing for television comedy, and it isn’t at all hard to imagine Furniture as a Netflix series, but her first impulses aren’t comic. “I never sit down to write something funny,” she says. “I don’t worry if it’s funny. I worry if it’s true. My motto has always been, ‘Funny by accident, not funny by design.’” But nor is she plunging into airless seriousness.

“We are a nation coming out of so much collective trauma,” she says. “It is the job of artists to try to unpack some of that collective trauma, but sometimes it’s not. I think there is a place for levity, for slick modern plays that aren’t necessarily looking backwards, but looking forwards, searching for new conflicts.”

The cliche of Irish theatre used to be harrowing dramas set over the kitchen table. Now you will find a psychodrama unfurling, on any given day, in an Ikea showroom, an Ebay auction, or an argument over a chair that is too important to sit in. “We’re redecorating our value system,” Kelly agrees. “We just mightn’t get everything we want into the room.”