Drake and Spotify: a match made in a frustrating hell?

Memeing of Life: His fifth record hits mixed reviews and takes over the streaming service 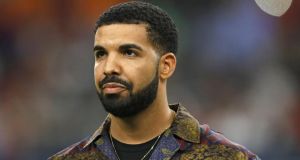 Drake: for some Spotify listeners, the tormented Torontonian’s image was on every single chart and playlist in their app. Photograph: Aaron M Sprecher/AFP/Getty

There are downsides to being a multimillionaire recording artist and cultural phenomenon like Drake. Having just emerged, sweating and defeated, from the beef with Pusha T that all but destroyed his already patchy street cred, he’s in the cross hairs of an entirely new movement against him, one which has resulted in scores of users protesting on the world’s number one music platform.

The Canadian rapper’s ubiquity – as well as his penchant for lifting styles from other cultures, constantly singing about heartbreak, and the whole “trying to cover up his illegitimate child” thing – has made him something of a punching bag for roughly the same number of people as those who slavishly adore his every release.

Take Scorpion, the mopey mic-holder’s fifth, and most recent, album, a record which is the first this century to have seven singles in the Billboard top 10 at once (for the week of July 14th), despite receiving mixed reviews. Pitchfork praised it for being “richly produced” and “studded with gems”, while Dean Van Nguyin in The Irish Times called it “painfully dull” and “downtrodden to the point of inertia”.

Even those who loved the record found elements to lampoon, not least his attempts to clap back at the revelations concerning his love child. “I wasn’t hiding my kid from the world, I was hiding the world from my kid,” Drake croons on Emotionless, a lyric quickly retooled in an avalanche of memes mocking transparent and unconvincing attempts to evade responsibility.

But another, seemingly more dystopian critique has been levelled at the sleepy-eyed superstar this week, and it concerns his deal with the streaming platform Spotify. Some users noticed their recommended libraries, playlists and charts seeming a little saturated by the GI Joe-jawed MC.

For some listeners to the service, the tormented Torontonian’s image was on every single chart and playlist in their app, including those like Best Of British and Hot UK R&B on which he shouldn’t appear. The situation was so extreme, some took to Reddit to share screenshots showing, in one case, 14 separate images of the vocoder-crazed virtuoso.

All of this prompted not just backlash, but a nationwide movement aimed at users getting a refund just for the stress of having seen so much of his face. Not that this is likely to bother the 6 God particularly, as the promotion appears to be working, with fans listening to the equivalent of 882 years of the album over its opening weekend. Nearly enough time, one hopes, for him to sit down to devise a comeback to Pusha T.