The The at Iveagh Gardens: Potent pop bullets in the dusk

Review: Matt Johnson probed the ailments of the modern world but the concert failed to fully ignite 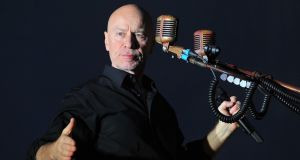 The keyboard guy made it look like he was going home just after the band struck up An Uncertain Smile. When you expected the first keyboard refrain, you got guitar instead. Matt Johnson was in great voice. Dusk had turned to dark. The band played on to an enraptured audience. Then the keyboard player returned to his post, an extra from a Kaurismaki film in his slicked hair and shades. He wiped his fingerprints and sweat from the machine: he was done. This was An Uncertain Smile with some showbiz tease. But now here it comes: the famous keyboard break, the Jools Holland piano run: a defining shard of the 1980s. The dexterous black-and-white notes kick in and it all comes together. The The’s magic gels in their single encore: a potent pop bullet.

Matt Johnson took to the stage at 9.10pm and played for 90-odd minutes. A vast sun-fried crowd had assembled in The Iveagh Gardens, its demographic a descriptor for the vintage of the act. The band gave powerful backing to Johnson as sung his complex, well-worked, familiar lyrics into a gothic trident mic-stand. He achieved his signature Tannoy announcement texture with a mere turn of his head towards one of the 1930s-style radio microphone casings. His expressive, poignant voice ladled out much-loved tunes: This is the Day, I’ve Been Waitin’ for Tomorrow (All of My Life), Love Is Stronger than Death.

For anyone who has seen The Inertia Variations, a feature-length documentary film about him, Johnson visited Dublin with an extra context. The film is a meditation on the speedy dissolve of passing decades and a fine inquiry into Johnson’s doubt about the point of creative output.

An insightful portrait of the artist, it pivots around the question of “what if you have passed your peak without ever actually having reached your peak?”.

Johnson is illuminated as a ruminant man who seems trapped in thinking too much about songwriting instead of doing it. The film builds towards a profound new song, We Can’t Stop What’s Coming, and shows his joy in the company of his father and brothers. By the end, we learn his graphic artist brother has died. And Johnson’s father passed away as this current tour commenced.

We Can’t Stop What’s Coming was played in the Iveagh Gardens as was The Beat(en) Generation, the latter’s pulse slowed, its lyrics clear: how many chart acts sing words such as “prejudice and misinformation”? Johnson’s caustic, literate take on economy, media and geopolitics was all there: evidenced in the songs Armageddon Days Are Here, Sweet Bird of Truth, Slow Emotion Replay. He engaged with the crowd and was more than personable. The band were tight and excellent. But somehow the net effect was lacklustre: for all the proficiency and professionalism, some atmosphere was lacking. It felt cold: for large chunks, the show was underwhelming.

A capacity crowd fuelled by sun, big screen football and spilt beer was often surprisingly inattentive. For all the delight of seeing The The in Dublin, many diehards alternated mouthing lyrics and dancing with turning their backs to the stage, their chatter drowning out Johnson’s songs and occasional patter. Maybe some were too many hours in the sun. Maybe the atmosphere never quite clicked.

A projected stage backdrop played with stark variants of white on black. The The delivered tunes probing commerce, power, comparative religions: an extraordinary body of work but some of the literate socio-political concepts seemed bulky and overblown in a live context. The concert worked best when Johnson delivered his sharp, incisive lyrics via catchy pop songs. Like in the encore.

At the start, he seemed to get annoyed. Stop blocking other people’s vista with your mobile phones, he said. And stop effing asking me to play An Uncertain Smile, he said, threatening not to play it. But he did. At the end. To mesmerising effect.