Mario Rosenstock finds that being himself is a tricky act

Radio Review: Rosenstock’s wit, invention and observation are absent from his radio show 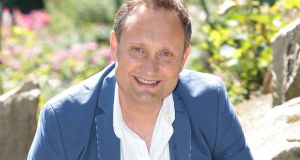 For someone who says he’s never presented his own radio show, Mario Rosenstock makes a good first impression as a debutante host. The only problem is that after opening the show with an impersonation of Joe Duffy – “Talk to Mario, go on, go” – Rosenstock has to speak in his own voice for the remainder of his new programme, Mario’s Sunday Roast (Today FM). This might seem a straightforward task, but having spent most of his professional life mimicking other people in his sketch slot Gift Grub, just being himself proves tricky for Rosenstock.

Part of the problem is technical, as the host struggles with links and allows dead air. But there’s a more fundamental issue: Rosenstock seems unsure about what tone to strike. One minute he has the over-eager manner of an insecure teenager showing off in front of the older boys: When Kieran McGuinness, of indie band Delorentos, observes that 1980s heavy metal bands sang about one part of their anatomy in particular, the host retorts with puerile glee: “There’s nothing wrong with singing about your penis”. The next moment he is oversharing personal details, such as a flat anecdote about his neighbour conspiratorially buying a paddling pool.

Most jarring is Rosenstock’s tendency to self-consciously issue why-oh-why jeremiads on contemporary society. He complains that people want to “hang” former footballer Patrice Evra for his apparently patronising on-air behaviour towards a female pundit. Helpfully, he also plays a clip of the offending segment, presumably for listeners not to get annoyed about.

Such moments smack slightly of desperation. So does the gimmick where panellists bring “ingredients to throw into the roast”, or to put it another way, are invited to raise a topical bugbear. It’s an approach that can work on a television show such as Room 101, but in this case it’s more like a lazy way to stir up controversy. Journalist Larissa Nolan talks about the hosepipe ban, and the snitching it supposedly encourages, as though it’s a harbinger of Stalinist totalitarianism.

Perhaps inevitably, that great bogeyman of free speech Cassandras, political correctness, also comes in for a drubbing. “I’m constantly asking, ‘is it all right to say it?’” Rosenstock asks plaintively. Nolan reassures him it is indeed okay, though “in the current climate, everyone is jumped on” for speaking their mind. Ho-hum. What’s largely missing is the wit, invention and observation that Rosenstock brings to his Gift Grub slots on Ian Dempsey’s Today FM breakfast show every day.

It’s not all so predictable. There are spirited exchanges as the host discusses Taoiseach Leo Varadkar’s apparent sniping at the media with Nolan and fellow panellists Margaret Ward and Brendan Ogle. (In what seems to be an exercise in trolling, rival mimic Oliver Callan is dissecting the Taoiseach’s views with Marian Finucane over on RTÉ Radio 1 at the same time.) Rosenstock’s aforementioned conversation with McGuinness about the rise of grunge stars Nirvana also makes for a diverting item.

Perhaps fittingly, Rosenstock sounds at his most natural when interviewing Eamon Dunphy, a figure so prone to self-parody as to render satirical impressionists redundant. As it happens, Dunphy comes across as more reflective and even reasonable than he sometimes does in his public pronouncements on soccer and society. Though he tells Rosenstock “you shouldn’t be afraid to speak your mind”, Dunphy also thinks “there has to be civility in public discourse”.

True, Dunphy hasn’t always seemed unduly interested in achieving this balance, but he has enough candour to admit that he gets things wrong. He also talks ruefully about his sundered friendships with Roy Keane and journalist John Waters. It’s an interesting encounter, helped by the host’s rapport with Dunphy, joshing him about his ability to hold diametrically opposing opinions. For once, Rosenstock isn’t trying too hard, instead sounding at ease with himself and his guest. Mario’s Sunday Roast may be overheated in some spots and raw in others, but turns out pretty well done for a first effort.

With the traditionally quiet summer season looming, the Ray D’Arcy Show (RTÉ Radio 1, weekdays) opts for a well-worn route: the radio road trip. But there is a twist – of sorts. D’Arcy makes his journey by boat, broadcasting from destinations along the Shannon. The intention, he says, is to highlight “Ireland’s hidden heartland”, which seems like a contrived term until D’Arcy confirms its veracity. “We got lost three times on the way here,” he quips.

It may not be the most imaginative formula, but it’s a successful one, at least in terms of attracting celebrity guests. Monday’s show, from Dromineer in Co Tipperary, features interviews with former Irish rugby international Keith Wood, legendary commentator Mícheál Ó Muircheartaigh and television chef Rachel Allen. It’s fluffy stuff, but has more star power in a single radio programme than D’Arcy mustered during the entire season of his television chat show, or so it seems.

More pertinently, the host sounds lively as he engages with people along the way. On Tuesday’s show, from Portumna, Co Galway, he participates in contests of hurling “keepy-uppy” with his guests, maintaining his good humour despite having a child’s hurley and a self-proclaimed lack of skill. “You know Kildare isn’t a hurling stronghold,” he jokes, in reference to his home county. But it’s an entertaining idea, executed with aplomb.

So relaxed is D’Arcy that he even turns a faux-pas to his advantage. After he mistakenly calls country artist Mike Denver by another singer’s name, the host cheerfully goes with the flow, asking his guest if this has happened before. (It has.) Getting in the spirit of things, D’Arcy recalls how people have mixed him up with the most unlikely characters. “I’ve been called Eamon Dunphy,” D’Arcy says, still incredulous at the memory. Clearly, even the most established presenters don’t always make a lasting impression.

Radio Moment of the Week: Alas Smyth and Johnson

Following the resignation of British foreign secretary Boris Johnson, veteran journalist Sam Smyth appears on Today With Miriam O’Callaghan (RTÉ Radio 1, weekdays) to talk about their friendship. He tells O’Callaghan how Johnson, who was a journalist before entering politics, was a regular contributor on Smyth’s Radio Ireland show. Smyth clearly liked Johnson – a lot: “He was great company.” But there’s a sting in the tail. “In the last couple of years he seems to have lost the run of himself,” Smyth says of his old pal. Where Johnson once “had the world at his feet”, now he sees his future “slipping away in the rear-view mirror”. Ouch. With friends like this, Johnson doesn’t need his myriad of enemies.