Paul Simon: what to expect at farewell concert in Dublin 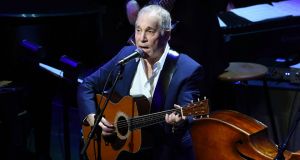 Paul Simon adopts a comical Mancunian accent as he remembers how promoters in the working men’s clubs would introduce him in the 1960s, telling audiences: “Shut up! You’ve ’ad yer bingo. Now give the turn a go.”

Thus, in 1964, frustrated by going on after the bingo and a struggling musician’s life in general, he sat on nearby Widnes station and penned Homeward Bound, a song about yearning to be off the road, which, ironically, is among the many that have kept him on it ever since.

Some 54 years on, he performs at the Manchester Arena on Tuesday with spooky emotional intensity for one the last time. When his Homeward Bound farewell tour reaches a grand finale in his childhood New York borough of Queens on September 22nd, he will bring the curtain down on six decades as a touring artist.

In the intervening years, this tiny man – all of 5ft 3in – has become a giant of popular music: half of Simon and Garfunkel, a megaselling solo artist and a world-music pioneer. Now 76, he looks slightly frail as he walks on and there is a slight tremor in his voice, but he soon finds his vocal range and even some enviably natty dance steps, as if performing these songs again have revitalised his life force.

He sings 27 of them in 140 minutes, careering through decades and around the globe, from Widnes, Cheshire, to Kingston, Jamaica (where he recorded the sublime Mother and Child Reunion , possibly the first white reggae track), to Salvador, Brazil (the percussive and brassy The Obvious Child ), to five selections from 1986’s Graceland, which brought African rhythms to western pop.

Simon reveals that after initial anxiety about stopping touring, he was finding the thought of various possibilities liberating, and he could do worse than become an educator or raconteur. Stories come thick and fast: how he wrote songs aged 13 amid the rock’n’roll explosion; how things started to happen when he traded his electric guitar for an acoustic, moved to England and met influential folkies such as Martin Carthy.

He reveals that the title of Rene and Georgette Magritte With Their Dog After the War was inspired by a photo caption, and that the kid who got on the bus in America pops up again in Rewrite, working in a gas station: a metaphor for the American dream delivered as an aside.

He speaks of “repossessing” his song Bridge Over Troubled Water from “Artie” (the golden-tonsilled Garfunkel, who sang the 1970 original to such devastating effect) as one might a car. Simon’s delivers this pop colossus in his slightly more conversational style, merely song number 11 in this set.

He has never rested unduly on his laurels, though, and with his 14-strong band, he reinvents old songs and peppers the set with new ones – references include global warming, inequality, sub-bass and Jay-Z.

Still, the final 10 songs form a breathtaking rummage in his top drawer, from a lithe and funky Late in the Evening to a celebratory, celestial segue of Graceland’s Diamonds on the Soles of Her Shoes into You Can Call Me Al that has the arena dancing. But emotion wells as the crowd act as an impromptu choir for a magical The Boxer. The line “I am leaving, I am leaving, but the fighter still remains” could be Simon’s musical epitaph, but he departs with The Sound of Silence, Simon and Garfunkel’s first hit from 1965. But there is no hush, only rapture, as the crowd rise to honour one of the very best.

50 of the best podcasts to listen to right now
6 Welcome to Dublin, unless you're black
7

Mild-mannered he may be, but Matt Cooper will go 10 rounds with anyone
Real news has value SUBSCRIBE