‘Opera is everything . . . sometimes too much of everything’ 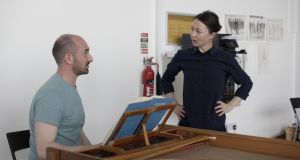 Emma Martin is about as disarming a person as you could hope to meet. She’s a dancer and choreographer who’s making her first foray into directing opera, taking on Gluck’s Orfeo ed Euridice for Irish National Opera at the Galway International Arts Festival.

So where did it all start for her? “I always danced and I went off and trained to be a professional ballet dancer in Germany. That was my absolute life goal. Pure ballet. That was all I wanted in life.”

Having achieved her ambition she found herself doing a double take. “Within two years I suddenly went, ‘Oh. Sh*t! I can’t see where I’m going from here’. I could see how everything worked within the ballet world and I had this image of myself 10 years down the line coming in, going to training – practically clocking in to a factory. I just didn’t want to get to a place where I hated it. So I took a step back, took some time out.”

Martin was 21. “I didn’t know who I was. I had been a ballet dancer since the age of three. I was a bit lost. I had to discover myself. I waitressed and partied and was a normal person for a while. Then I was back in Ireland and there wasn’t much really for me here. I was in between. There were contemporary dance companies and then the Irish Ballet Company. I didn’t fit in either.”

She “danced for a little bit with a few choreographers” and then went back to college to study Russian and theatre. “The Russian was just decoration, really, to force myself to read Russian literature and take on the language. I felt, I’m going to go in, I’m going to spend all that time, major in theatre, and I’m going to come out as a one-woman band. And start making my own work.”

She didn’t stop dancing. “There was this thing where a few dancers had gotten a studio space. There was a rota system where you could put your name down for an hour a day if you wanted. I’d spend an hour a day in the studio just dancing, and trying to dance the ballet out of myself, just to see who I actually was as a dancer without the affectations of ballet.”

Martin kept that up for four years and by the end, she says, although she majored in directing for theatre, there was more dance in her work than there were words. “I just made my first show, straight out of Trinity,” she says. “That was it. I just kept making work then.”

That first show, The Listowel Syndrome, was “a dance theatre show. I had no money for it. I had about 13 people on stage and we did it in the Dublin Fringe Festival. Róise Goan at the time liked the idea for it. There was this thing that happened down in Listowel, a sexual assault, a girl from one side of town, a fella from a good farming family. He was convicted, but the whole community lined up and shook his hand, including the parish priest. They were consoling him on the day [in court] and this girl was left alone.

“I made the show about the darker side of communities. Community always has such a bright feeling to it. But actually community can very often turn around and be the dragon. There was music, there was singing, there were some texts and some dancing. It was a 40-minute show, but Róise Goan put us on at eight o’clock on the main stage in the Project Arts Centre.”

It was fantastic, she says. But there was also a lot of media attention surrounding it, which was “quite scary”. Sara Keating’s four-star review in The Irish Times praised the work’s “vigorous conviction” and said “Martin’s modernist choreography is at once beautiful and brutalist, as a duet of curious first encounters becomes a violent tussle and then a predatory kill.”

Fast forward through a range of acclaimed and award-winning work to 2018 and the challenge of her first opera. She had worked in opera as a dancer and says: “I’ve always thought that at some point I will make an opera.”

For her, opera as an artform, “it’s just everything. Sometimes it’s too much with everything that’s going on. With some of my dance collaborators I’ll often talk about things . . . when I’m talking about different physical states stuff, I’ll be, like, ‘Greek opera!’. You know, that EPIC feeling”.

But she absolutely was not expecting an overture from Irish National Opera (INO). “Fergus [Sheil, artistic director of INO] asked me and I was really surprised. I was in the middle of making another show and I think I said to him: “Oh God, maybe ask me again in a few years’ time. I don’t think I’m ready for it.’ And then he told me what opera it was, and I was, like ‘Oh. Jesus. No.’ I was terrified. And also because I’ve never re-interpreted an old work.”

In the past she’s only ever had to consult herself. “Yeah. And now I’m dealing with a dead guy.”

In opera there is also, of course, the factor of musical time, the progress of which is hard to interfere with.

She almost glows when she talks about Orfeo ed Euridice, a work that broke with the 18th-century tradition of showy arias with repeated sections for the singers to embellish with even greater virtuosic achievements.

“There’s something beautifully simple about it. It feels like a velvet rug that’s laid out. It’s very rich. I don’t feel constrained at all, actually. I feel really free within it, to use the things that are meaningful for me, and bring the cast and the singers and the dancers along. There was some disciplining in my own head before I came into this.”

In the past when she’s had a composer in the room “I’ve slapped myself across the face for it, but I’ve been sitting on their shoulders going, ‘Oh no, no, no, no’. It’s not fair.” As you get older, she says, you get better at giving other people their space. But “I did have a lot of disciplining to do with myself.”

The conductor, Peter Whelan, artistic director of the Irish Baroque Orchestra, “has been amazing to work with. We’re quite in the same mind about certain things” – including their attitude to the various versions of the work and some cuts. “He’s been really up for it.”

Probably the biggest challenge, she says, has been figuring out “how to work with the emotional and tonal shifts, especially during arias. Then forcing myself to realise that it’s okay to keep certain things quite simple in the staging of them. Not needing to overcomplicate things. Sometimes there’s enough in the expression of the singers’ voices.”

Her biggest surprise has been “probably the amount of precision that singers need physically to be told. With dance you work quite organically. You might give someone a phrase and then ask them to play with it. You give them a different physical state – try it in honey state, or in concrete. With singers you obviously use a different language and you’re connected to the emotions, to the words and what they are saying. It’s very different. You have to give quite a lot of geography.”

The original myth – Orpheus, the musician who can charm wild animals, rescuing his wife Euridice from the Underworld but losing her because he turns to look at her – is “the big draw” for Martin. That is something she is set on making clear in her production.

‘Hey, faggot!’: Gavin McCrea on a lifetime of homophobic abuse and violence
2

Children of the Troubles: They took a child off the road, put a hood over his head and killed him
5