‘The CIA won the broadcast war. They always do’

Director Scott Z Burns talks about US torture practices, democracy and why he had to make The Report 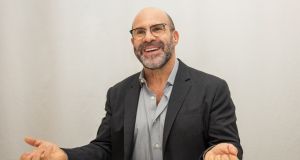 When director Scott Z Burns was briefing Adam Driver on his role as Daniel Jones in The Report, he hit upon a stark, terrifying metaphor. “Imagine you’re given a blueprint that is old and dusty and you are asked to build something,” he said. “A few years in you realise you have been asked to construct your own gallows.”

Jones did not end up at the end of a rope. But he soon realised that his task bordered on the Sisyphean. Early supporters became enemies. Apparently benign instruments of government grew teeth and gnawed at his ankles.

Dan Jones was the US Senate staffer who lead an investigation into the CIA’s torture of suspects – euphemised as “enhanced interrogation” – in the aftermath of the September 11th attacks. The authorities appeared to believe that they could bury the truth in obfuscation, but Jones, a dogged, principled young man, was not to be shaken from his task.

Arriving in 2012, the eventual report was heavily redacted. John Kerry, shortly to take over as secretary of state, urged for a delay in release, as he felt the controversy could damage relations with key allies. Senator Dianne Feinstein, then chair of the Senate Select Committee on Intelligence, stood her ground and ensured the information got out there.

It hardly needs to be said that Burns’s film ploughs through a vast amount of data. There is no spoon-feeding. Imagine Alan J Pakula’s All The President’s Men on a tighter budget and you’re half-way there. A middle-aged Minnesotan, known for writing The Bourne Ultimatum and Contagion, Burns can reasonably consider his directorial debut a critical smash. The Report landed noisily in Sundance earlier this year and sold for a packet to Amazon. But the pessimist in me wonders if the theatrical audiences are still there for such complex material. Yes, All the President’s Men was the fourth highest grossing film in the US during 1976. But those were different times.

“Obviously it’s a self-sorting thing. Nobody has come up and said: ‘I am completely baffled by your film’,” Burns says. “We worked hard to get a cinematic style so you’d know when you were in flashback. We added a graphical timeline in post. Our budget was very small. We shot it for $8 million dollars in 26 days. I didn’t have time to put Adam in a chair and age him. Adam had to work the exasperation into his face over a few weeks telling a story that took years.”

Driver is excellent in the film. Always good at manic focus, the actor conveys the sense that it is professional pride as much as moral indignation that drives Jones. Now working for a non-profit organisation that promotes “accountability, transparency, and good governance,” Jones has been quietly and solidly supportive of The Report. It can’t be easy watching your life get the semi-fictional treatment.

“There were boundaries. Adam is not Dan and I didn’t ask him to do an impersonation,” Burns says. “We were developing with HBO for a while. And they were saying: ‘Do we want to go home with him? Do we want to see his girlfriend?’ I said: ‘I think we all know what those scenes would be. I don’t want to do that.’ There’s a nod to that executive at the beginning of the film when he says: ‘I was in a relationship, but I wasn’t a very good partner.’ That’s as far as we would go. The fictionalising of Dan Jones was something we worked hard on.”

Burns makes a good point. Too many good actors have been cast in patronising “wife roles” that require them to do little more than nag the protagonist about not putting the bins out. Burns’s film is focused acutely on the investigation. Even after all subsequent conversations, the state’s evasions remain horrifying. The humanitarian argument against torture should be enough in itself. But The Report makes it clear that – for those willing to assess the data without bias – it was clear that the abuse was yielding little intelligence worth having. Not that you heard much about this on US television

“I think Dan is really happy with the movie,” Burns says. “But he felt frustration after the report came out. There was good print coverage in the US and in the Guardian. But because the CIA can put so many talking heads on screen they won the broadcast war. They always do. The movie stands as a visual device to explain his ideas.”

Kathryn Bigelow’s contemporaneous Zero Dark Thirty gets what feels like a shady nod in The Report. Released in 2012, that film, telling the story of the hunt for Osama bin Laden, has been accused of – at the very least -–remaining neutral on the US’s torture programme. Do I detect a dig at Bigelow and her screenwriter Mark Boal?

“The reason that scene is in there is it’s part of Dan’s experience,” Burns says. “He was walking home one night and he saw a line around the block to get into that movie. The frustration for him was significant. He was working on a Senate report that was going to be dry. His was a type of storytelling that required years of approval and all this work – while a movie could be released and a different narrative could find its way into the culture. That said, I think Mark and Kathryn are incredible storytellers. She’s said she doesn’t think the movie is an endorsement of torture. She’s not pro-torture.”

We move on to something else and, a few sentences into his answer, Burns swivels back to the earlier topic.

“Kathryn and Mark are friends of mine,” he says. “I am really not here to piss on their movie. I am terrified when asked about this that the journalist will just take one bit out of context.”

US audiences – the sort that go to films like The Report in particular – will be intrigued by Annette Bening’s unshowy performance as Dianne Feinstein. Mayor of San Francisco from 1978 to 1988, senator for California since 1992, Feinstein is among the avatars of the Democratic Party. Some politicians get giddy when Hollywood calls, but Feinstein is formed from less excitable matter.

“I initially contacted Senator Feinstein’s office to see if we could speak to Dan,” Burns says. “I explained I was trying to write a movie about all this. We wondered if she might want to talk to us. But it’s funny. She’s not really interested in movies. I found that to be really refreshing. She doesn’t want to play the pop culture game.”

If you spend a quarter of a century as senator for California, you must, I guess, get used to processing the entertainment industry’s requests.

“Senator Feinstein participated by not participating,” Burns says. “There’s a line in the movie: ‘It’s my job to provide oversight in the law – not with cameras and the newspapers.’ I have a lot of respect for that. You can call her naïve. This is the world in which we live. This is how reality is created. But I am impressed by her resolve to stick to the facts.”

The version of Feinstein in The Report is a vital force in the film’s arguments with itself. The publicity material makes clever use of the black blocks that signify redaction. The torture scenes are all the more horrific for the clinical way they are carried out. In the film’s later stages, the script appears to accuse the Obama administration of trying to bustle the report into a quiet corner.

And yet. Jones did complete his work and his key conclusions ended up on the record. That would not happen in every country. In some senses the film is a tribute to American democracy.

“I am so tempted to be a Cheshire Cat. It’s not my job to answer that,” Burns says.

Fair enough. But he must have a view. He is a citizen as well as a filmmaker.

“I love Pakula and Sidney Lumet movies because they taught me to have a certain degree of ambiguity in these conclusions. I remember at the end of Lumet’s Serpico thinking: ‘Is Frank Serpico a hero for revealing all this corruption or is a he a victim for getting shot in the face at the end?’”

He shrugs and adopts an equivocal face.

“As an American, I feel my patriotism is engaged because this amount – 500 or 600 pages – did come out,” he says. “I am saddened that the programme ever happened. I am sorry that the system is in such disrepair that it needed someone with such integrity to get the story out.”

The picture ends with a quote from George Washington urging the young nation to behave ethically towards its enemies.

“The reason I put that quote up from George Washington was to point out that this was who we were supposed to be. Where have we gone from that?”

And where is the nation going next?

The Report opens on November 15th