Six of the best films to see in cinemas this week

New this week: Monos, The Aeronauts, Sorry We Missed You, Doctor Sleep, Brittany Runs a Marathon 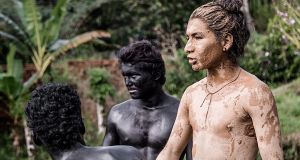 MONOS ★★★★★
Directed by Alejandro Landes. Starring Sofia Buenaventura, Moises Arias, Julianne Nicholson, Moises Arias, Deiby Rueda, Karen Quintero, Laura Castrillon. 15A cert, lim release, 103 min
Lord of the Flies is an obvious reference for this nervy, thrilling tale of child guerilla soldiers. But there’s also something Aguirre, the Wrath of God in Colombian director Landes’ surreal, wildly beautiful third feature. The near feral teenage commandos, known only by their nicknames (Dog, Bigfoot, Rambo, Swede, Smurf, Boom Boom), take their orders from The Messenger (Salazar), who represents a mysterious paramilitary called The Organisation. When two of the Monos, Lady (Quintero) and Wolf (Giraldo), are tasked with watching over an American prisoner (Nicholson) and a cow called Shakira, a series of events implodes their rough society. Easily one of the best films of 2019. Full review TB

James Glaisher (Redmayne) was the daring meteorologist who, in 1862, broke the world record for altitude when his balloon ascended to 35,000 feet. In old-fashioned, matinee style, Harper’s film builds a grand romantic adventure - Jones is super as his fictional companion - around the story’s central spine. You can get the facts from Wikipedia; The Aeronauts devises irresistible new legends. Lovely Victoriana. Great chemistry between the leads. At least one heart-stopping moment of tension. Well worth your time. Full review DC

A middle-aged man signs on as a “self-employed” driver for a delivery firm. His life falls apart. Collaborating again with writer Paul Laverty, Loach does an excellent job of explaining how “the gig economy,” relieves employers of moral and legal responsibilities. The research feels spot-on, but the heart-breaking performances are what really drive the film. Hitchin and Honeywood are great as mum and dad. Stone and Proctor are next-level as the children. Loach is still at the top of his game. Full review DC

In this intermittently successful sequel to The Shining, McGregor plays the psychic Danny Torrance, son to mad Jack, now grown into a disappointed drunk. Ferguson is Rose the Hat, a sort of MTV witch - Stevie Nicks’s titfer and Joan Jett’s strides - who sucks power from kids with Danny’s gifts. This works well as mid-level Stephen King for much of its duration, but, by the close, the dysfunctional relationship with Kubrick’s movie becomes too much to bear. Ends as a Shining theme-park ride. Full review DC

Brittany (Bell) is a 28-year-old living in New York and scraping enough money from her job as an off-Broadway theatre greeter to live a boozy lifestyle with her passive-aggressive roommate Gretchen. When Brittany visits her doctor in the hope of scoring some Adderall, he suggests that she should lose 55 pounds. So Brittany takes up running and finds an equally unfit exercise companion in Seth (Stock). Together, they hatch the idea of running in the New York City Marathon. Unhappily, just as it looks as if Brittany is getting her act together, self-sabotage kicks in. Crowd-pleasing and - and whisper it - uplifting. Full review TB

A young African-American man takes back the San Francisco house, subsequently a casualty of gentrification, that his family first acquired in the 1940s. A deliciously strange, aurally seductive reverie on how cities change and how they stay the same, Last Black Man has much to say about how African-American people have been edged out of the neighbourhoods they helped create. But it is the cinematic poetry that stays in the brain. Skateboards down mighty hills. A rowboat in the choppy bay. Unlike anything else in cinemas. Full review DC

Other ★★★★★  and ★★★★☆  films out and about: A Bump Along the Way, By the Grace of God, Dora and the Lost City of Gold, Hustlers, Joker, Lost Lives, Pain and Glory, The Peanut Butter Falcon, A Shaun the Sheep Movie: Farmageddon. All current synopses here

The Music Quiz: Who played a Dublin gig on the same night as Adele in 2008?
9