Brittany Runs a Marathon: Crowd-pleasing and – whisper it – inspirational 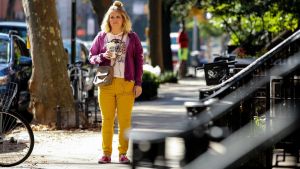 Jillian Bell: a runaway hit in Brittany Runs a Marathon

Brittany Forglar (Jillian Bell) is a 28-year-old living in New York and scraping enough money from her job as an off-Broadway theatre greeter to live a boozy lifestyle with with her passive-aggressive roommate Gretchen, a teacher’s assistant shooting for social media celebrity.

“It’s starting to feel as if everyone’s lives are going places and mine is sort of stuck,” Brittany tells Gretchen between hard-partying. Worse, when Brittany visits her doctor in the hope of scoring some Adderall, he suggests that she should aim to lose 55 pounds.

At the behest of a neighbour she doesn’t like (Michaela Watkins), Brittany takes up running and finds an equally unfit exercise companion in Seth (Micah Stock). Together, they hatch the idea of running in the New York City marathon. Unhappily, just as it looks as if Brittany is getting her act together, self-sabotage kicks in. She may have ditched the pounds and her toxic roommate but there are layers of defensives that even her paternalistic brother-in-law (Lil Rel Howery) and her semi-love interest (Utkarsh Ambudkar) have trouble getting past.

Brittany Runs a Marathon was inspired by Colaizzo’s roommate, Brittany O’Neill (who appears in photos before the end credits) and the screenplay is as astute as it is likeable, while treading delicately around the politics of weight loss and body positivity.

Jillian Bell has a reputation for scene-stealing and her promotion to heroine is long overdue. And what a heroine. Brittany can be as maddening as she is funny, as mean as she is relatable. It helps that Bell is surrounded by a lovely ensemble cast, with actors such as Michaela Watkins and Utkarsh Ambudkar bringing nuance to carefully written characters. Crowd-pleasing and – whisper it – inspirational. On your marks.