Sorry We Missed You: One of Ken Loach’s best films

Review: Film shines a light on the grim reality of gig economy workers 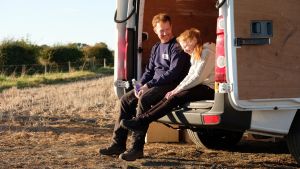 Kris Hitchen and Katie Proctor in Sorry We Missed You

Film Title: Sorry We Missed You

Over the last 50 years, as the faces in cabinet shifted and the slogans at party conferences mutated, Ken Loach has continued to tease out the various ways in which the working-class get shafted. He has touched on homelessness, unemployment and – in the recent I, Daniel Blake – the cynical complexities of the welfare system. This year’s bracing lesson concerns what’s gone wrong with work.

Collaborating again with Paul Laverty, his dogged screenwriter, Loach does an excellent job of explaining how “the gig economy”, by facilitating a bogus class of self-employment, relieves employers of moral and legal responsibilities.

The word “lesson” is worth hanging on to. Even some of those within Loach’s political cadre have winced at the occasional broadness of his techniques. You won’t get any counterarguments here. No time is spent with those (mostly young and single) who profit from the new arrangements. As in I, Daniel Blake, there are some near-saintly characters among the victims – Debbie Honeywood’s terrific performance as a harried mum can’t quite ward off hagiography – and the odd bellowing monster among the boss class. But the passion, the fluid film-making and the consistency of the acting more than compensate for the expected clunks. Indeed, the film ultimately feels less skewed than I, Daniel Blake.

We are back in Newcastle where Ricky (Kris Hitchen), still trying to recover from the 2008 crash, elects to sign on as a delivery driver for a private parcel farm. We know he’s heading for trouble when, against his wife’s wishes, he sells the car to pay for a new white van. Abby (Honeywood) is never wrong and, even if she didn’t need the vehicle for her work as a carer, Ricky should have paid heed to the warning notes in her voice. It hardly needs to be said that he ends up regretting the decision.

Laverty’s script offers a masterclass in working research into narrative. Those (like this writer) only vaguely aware of how such arrangements exploit, will be brought up to speed in staggeringly efficient fashion. Ricky shoulders all the responsibilities of an employee, but enjoys none of the concomitant privileges. He not only loses money if he is unable to work, but he can also be subject to penalties. The film’s most sinister discovery is the power of the handheld computer (the thing you sign when getting your Amazon order) that monitors the driver’s every move and every delay. Dystopia is already here.

The film’s sharp title is there to remind us how companies distract from the bloody inner machinery with glib phrases and jaunty conventions. His role derived from appalling true stories, Ricky ends up in a vicious cycle that poisons relations with his family. Seb (Rhys Stone), their initially wry and amusing son, sinks into aggression and petty crime. A late attempt by Lisa (Katie Proctor), their positive, intelligent daughter, to restore the old balance is as heart-wrenching as it is futile. Through it all, Abby remains very much – a little too much? – the voice of moral rectitude.

Loach has always been good at drawing great performances from non-professional actors. The two adults are excellent, but it is the teenagers who register most strongly. Making good use of a voice that still seems surprised by its deep brown register, Stone works full-throated vulnerability in with half-hearted aggression. Proctor is better still in a part that, in less skilled hands, could have tipped into the saccharine.

As ever, the support team are at their best. The versatile cinematographer Robbie Ryan moves seamlessly from the formality of The Favourite to the energetic clatter required for a film in constant pursuit (watch out for him adopting a third successful attitude in the upcoming Marriage Story). Jonathan Morris’s editing and George Fenton’s score hit the right beats. It is, however, those excellent performances that steer Sorry We Missed You away from didacticism and towards the Loach all-time top 10.