Doctor Sleep: Like an evening in a Shining theme park

Review: Ewan McGregor stars in a less intense sequel to The Shining 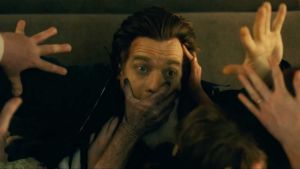 Few are the films that have such a dysfunctional relationship with their sources and predecessors.  As you will almost certainly be aware, Doctor Sleep is adapted from Stephen King’s sequel to his own novel The Shining.

For much of its lengthy duration, Doctor Sleep reminds us why King matters and reassures us that he’s still got it (or some of it). The grown-up Danny carries around many of the author’s familiar concerns: regrets about family, worries about mortality, a tendency to wake and discover he’s thrown up on his date. More rooted and vulnerable than usual, McGregor convinces as a ruined man (we hardly need explain what did the damage) who needs a helping hand to get him back on the straight path. He finds that assistance in a small town where he dries out and locates work at a local hospice.

The centre of the film combines King’s rock ‘n’ roll humanism and New England gothic to diverting effect. Mike Flanagan, who did a good job on the author’s Gerald’s Game, draws varied performances from all and allows just enough Grand Guignol into the growing unease.

If only it weren’t for the evil step-parent lurking in the wings. It is well-known that King has little time for Stanley Kubrick’s film of The Shining, but no sequel was going to get by without leaning towards that copper-bottomed classic.

On reflection, “leaning” isn’t the word. “Genuflection” would do better. The classic 1980 Warners logo has barely left the screen before we are presented with virtual shot-by-shot restagings of well-remembered scenes: Danny pedalling his bike, the crone in the bath, the eerie twins. Where bum-notes do sound they serve only to stress how much blander mainstream cinema now is. Alex Essoe, who plays Danny’s long-suffering mum, is a good actress, but her face has none of the off-beat character that helped make Shelley Duvall so memorable. One can’t help but think – easy enough to do if the Kubrick estate can be tamed – that they’d have been better off just cutting scenes from the original picture into the current release. Those allusions drift away from much of Doctor Sleep’s decent middle act, but the ending feels like an evening in a Shining theme park.

All this might matter less if the current project was not so different in tone to The Shining: less intense, looser in its shape, more generous to its characters. Mind you, one of the film’s messages is that there’s no escaping your past. An odd, odd project, but not unenjoyable.