Jillian Bell: ‘We’re not saying that life is great once you lose weight’ 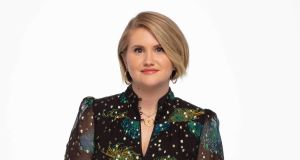 Even dressed in black, Jillian Bell makes for a colourful presence. Though mostly known as a supporting act, the actor and comedian is immediately recognisable as, well, the funniest thing in every movie she has appeared in.

Her outrageous scene-stealing – think the mad kiss-punch-up (“Are you Mr and Mrs Smith-ing me?”) or her relentless riffing on Jonah Hill’s age (“When you read Grapes of Wrath were you just like ‘yeah, totally’?”) – was the best thing about 22 Jump Street. Her meth-addicted guidance counsellor brightened Fist Fight and her TV work on comedies like Workaholics, Eastbound & Down, and Curb Your Enthusiasm is always splendid.

It’s about a woman falling in love with herself. And we just don’t see that enough in films, especially with transformation tales

Brittany Runs a Marathon, her first lead role, makes for a neat career analogy; the overweight, wise-cracking heroine who attempts the distance of the title is, like many of the characters Bell has previously essayed, a classic supporting part. It’s one of many clever inversions in the first feature from playwright Paul Downs Colaizzo.

“She’s a sidekick,” nods Bell. “The writer-director Paul talks about this a lot. His idea was to take a whole cast of what would be sidekicks in another movie and humanise them and give them layers, to have people empathise with them and see them in a totally different way. That’s what I loved about the film. This person in the film is the character that comes and says something funny and motivates the lead and exits. And this film asks you: who is this person? What brings them joy or pain?”

Brittany Runs a Marathon has bucked the odds and turned a profit in what has been a catastrophic summer for independent releases. The film was sensationally received at the Sundance Film Festival, winning the audience award and igniting a bidding war that culminated in Amazon Studios buying the film for $14 million. One of the film’s producers joked that Bell should never return to the Utah festival as it will never be that good again.

Much of the appeal lies in a fantastically complicated and wildly fun character study. Loosely based on a friend of the film’s writer-director, this portrait of a befuddled twentysomething New Yorker, swamped by toxic relationships, booze and bad life choices, shares some DNA with Fleabag and some with Ugly Duckling transformation pictures.

“It’s about a woman falling in love with herself,” says Bell. “And we just don’t see that enough in films, especially with transformation tales. It’s usually: somebody loses weight and then their life is perfect. This is the opposite of that. And that’s what I loved about it. It shows the emotional journey you go on if you change something in your life – that change doesn’t have to just be physical, it can be anything – and the good and bad things that come with those changes.”

Brittany Runs a Marathon negotiates a very careful path around women and their weight. The heroine’s adventure begins when a doctor tells her that she ideally needs to start exercising and should aim to lose between 45 and 55 pounds. “That’s the weight of a Siberian husky,” she says incredulously. “You want me to pull a medium-sized working dog off of my body. Is that right?” Slowly, she works her way up from 5km to the classic 42.2km, but the weight loss – although impressive – doesn’t address her many emotional shortcomings.

Like Brittany, Bell took up running for the first time ahead of taking the role and lost more than 18kg. Early, heavier scenes required prosthetics and fat suits. By the time she shot the marathon scenes at the end of the 28-day shoot, she had lost so much weight, she needed fat padding.

“It was important for me to do the physical journey as much as I could,” says Bell. “In the film she loses 40 pounds so I wanted to do that because I decided that would connect me to some of the emotional beats of the film. I wanted to take that on. As soon as I read the script, I was instantly protective of her. I read the script and I thought: how did this person get inside my head? So I wanted to do as much as I could to get myself into the frame of mind of this character.”

Bell has subsequently regained about half of the weight she lost before the shoot. That journey has been an emotional labour that is mirrored by events and attitudes found within the film.

“I have my own relationship with my weight and my body and my skin and it’s uncomfortable at times,” says Bell. “I read a study that said from three and six years old, that’s when girls start developing hatred for their bodies. I think that is so upsetting that we’re so small and vulnerable and we’re already starting to gather from the society we live in that being a certain size is wrong and being a certain size is right. This film does not shy away from that. It shows a woman who has a specific goal and it’s related to a health matter and she has this idea of running this marathon. And society starts treating her better or differently. And once she treats that as her value; that’s when she really gets off course. I think that is a great message. That’s her reality. We’re not saying that life is great once you lose weight. We’re not saying that men won’t start to treat you differently if you lose weight. So many women have come up after the movie and said: you’ve made a movie about me.”

Bell was born and raised in Las Vegas, Nevada, where the Strip, in particular the Second City comedy review, provided an early education in showbusiness.

“It was an interesting place to grow up,” says the 35-year-old. “I grew up in Henderson so that’s 10 minutes away from the Strip. My high school and grade school were in Las Vegas. There was a lot of entertainment around. I remember going to the Flamingo Hotel every weekend to see Second City. And it was the same show every weekend but I was so fascinated by what jokes worked one night and what didn’t work another night and how it played with different audiences.”

At 18, she went to Los Angeles and became part of the Groundlings comedy theatre. She was not, she notes, an overnight success. At 25, she tried out for Saturday Night Live and was signed on as a writer for a year. In 2011, she starred as “Jillian Belk” on what would become the long-running Comedy Central series, Workaholics.

“I didn’t get my first job in the industry until I was 24,” she recalls. “I was working in a talent agency, answering the phones, calling out commercial auditions for other people, learning what an agent’s role is, how much they actually do and why you shouldn’t actually be calling to annoy them all the time. Even after I got my first acting job, I still was thinking: can I myself an actor? I feel like we’re all in LA; everybody’s an actor. I guess that changed when I started doing Workaholics and the steady paycheques started coming in. But what was interesting was after my first season of Workaholics there was a long period of time before it came out and we were waiting to find out about a second season. So by the end of that year I was so broke I went back to the talent agency and started being a receptionist again. And people would come in and say: I thought you had a show coming out? I thought you were writing for SNL? Yeah. I did and I do. It was very humbling.”

On Workaholics she gained a superfan in Paul Thomas Anderson. The American auteur cast her in The Master and again in Inherent Vice.

“He’s such a brilliant guy,” says Bell. “He’s been making movies from such a young age and he hasn’t created any shit yet. It’s all brilliant. One of my favourite movies is Magnolia. But I hadn’t seen There Will Be Blood and I put it off until after I had worked with him in case it was too intimidating. I was so blown away. I think I watched it once a week for, like, six months. I became completely obsessed with it.”

It seems unlikely that Bell will need to return to receptionist duties any time soon. Next year she’ll appear in the long-awaited sequel, Bill & Ted Face the Music.

“I have such a small role,” she says. “But I would have done anything to be in that movie. I’m such a fan of the first two films and I’m such a fan of Keanu Reeves and Alex Winter. And to see them get back into character in front of you is really, really cool.”

Brittany Runs a Marathon is released on November 8th