Oscars countdown starts here. And the Irish are in the race

Irish-financed film The Killing of a Sacred Deer produced by Dublin-based Element Pictures, has been named the joint winner of the award for Best Screenplay at the Cannes Film Festival. 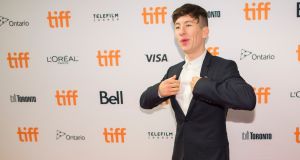 Barry Keoghan at the premiere for “The Killing of a Sacred Deer” at the Toronto International Film Festival. Photograph: Geoff Robins/AFP/Getty Images

Awards season has begun. Okay, that’s not quite true. With next year’s Oscars happening in March we’re still more than six months away from the ceremony. The Toronto and Venice film festivals announce the beginning of a phoney war that leads into open conflict when the guild awards and critics gongs kick in before Christmas.

What we do get to see at Toronto is a selection of the domestic movies that will seek to conquer worlds in the coming year. Never forget that Lenny Abrahamson’s Room began its journey to the Oscars when it won the People’s Choice here.

Two of this year’s Irish batch – Yorgos Lanthimos’s The Killing of a Sacred Deer and Nora Twomey’s The Breadwinner — have some chance of action at the Academy Awards. Reviews suggest the rest of the bunch are not really the sort of films the codger electorate notices, but the reviews have for the most part been strong. The success story continues.

The Killing of a Sacred Deer

We saw The Killing of a Sacred Deer at Cannes and thought it among the best films in competition. Featuring chilling turns from Barry Keoghan and Colin Farrell, the picture is another grim absurdist symphony from the Greek master.

In truth, it’s probably too grim for the Academy. But they may sneak a screenwriting nod. The Killing of a Sacred Deer, which shared best screenplay at Cannes, was financed and developed by Element Pictures in Dublin. Like most of the films mentioned here, the Irish Film Board supported its production.

Our Oscar contender this year is more likely to be The Breadwinner. After securing best feature animation nods for Song of the Sea and The Secret of Kells, Cartoon Saloon’s latest adapts a novel by Deborah Ellis concerning an Afghan girl who must disguise herself as a boy to support her family.

Steve Pond at the Wrap was very much on its side. He wrote: “In the film’s spectacular final sequences, when the story Parvana is telling meshes with the one she is living, “The Breadwinner” is a glorious demonstration of the power of myth to deal with brutal reality, and the power of truth to animate myth.”

The Oscar rules have changed in such as way as to make it harder for independent films to secure animation nominations. But, with Angelina Jolie on board as producer, the Kilkenny-based outfit’s film will be hard to ignore.

Jared Mobarak at The Film Stage commented: “The filmmakers use expert care to ensure the horrors depicted don’t go beyond those of villains to combat the good. There are beatings and gunshots, chases and yells, but without them you wouldn’t absorb the dire circumstances at-hand or the strength this little girl wields to rise above the injustice surrounding her.”

There were more strong reviews for Sophie Fiennes’s Grace Jones: Bloodlight and Bami. Produced by Katie Holly for Blinder Films, the documentary makes a close study of that veteran art-rock star.

Stephen Dalton of The Hollywood Reporter explained: “For casual fans, the film’s key selling point will be the live musical numbers, specially staged in a Dublin theatre, which do a great service to future generations by immortalizing the matchless spectacle of a Grace Jones concert ... These clips offer an eye-popping blend of catwalk show, Dadaist cabaret and ravishing glam-rock extravaganza.”

Keith Uhlich at Slant Magazine acknowledged that the film felt “fragmented”, but still enjoyed it. He described the off-stage moments thus: “The effect . . . of Fiennes’s unmoored approach to her subject is to take us out of normal time and put us on Grace Jones time. A true star moves through life to the tick of their own clock.”

There was measured enthusiasm from the big-hitting journalists for Haifaa Al-Mansour’s Mary Shelley. Produced by Ruth Coady for Parallel films, the picture stars the unavoidable Elle Fanning as the creator of Frankenstein.

Al-Mansour, the first woman to direct a Saudi Arabian film, shot much of Mary Shelley in and around Dublin.

Benjamin Lee from The Guardian mused: “Fanning is a convincing actor, no matter what the role, and she puts in a solid turn here, vulnerable yet feisty, romantic yet rational, and we can understand her internal processing of the events that led her to write Frankenstein.

“In familiar period territory, there’s also an interesting focus on a side of early 19th-century society we don’t often get to see: raucous, hard-drinking teenage debauchery.”

Deborah Young at the Hollywood Reporter was also on the film’s side. She wrote: “Mary Shelley is a luscious-looking spectacle, drenched in the colours and visceral sensations of nature, the sensuality of young lovers, the passionate disappointment of loss and betrayal. But above all it is a film about ideas that breaks out of the well-worn mould of period drama (partly, anyway) by reaching deeply into the mind of the extraordinary woman who wrote the Gothic evergreen Frankenstein.”

We are still waiting for reviews of Rebecca Daly’s Good Favour. This is a madly busy festival and it takes a while for critics to catch up with films. That picture stars Vincent Romano in the tale of a wounded stranger cared for by a mysterious religious community in an obscure part of Europe. We expect much from the director of Mammal.

Aoife McCardle, successful video director, makes her feature debut at Toronto with Kissing Candice. It sounds fascinating. The excellent Ann Skelly, late of Red Rock, stars as a young woman who appears to encounter a fleshy version of the man who haunts her dreams.

David D’Arcy from Screen Daily wrote: “Kissing Candice is an example of Irish filmmaking that skirts the roots of a literary tradition, eschewing extended dialogue and the language-bound conventions of the theatre . . . the director is fortunate to have a young actress like Skelly whose face conveys an emotional complexity that can sustain long close-ups.”

Eli Fine from the Playlist was equally impressed by the star. “Skelly is remarkable as Candice. I’m not sure how much that has to do with her having a fascinating physicality as opposed to natural acting ability, but the performance is virtually flawless.”

David Freyne’s The Cured picked up an invaluable strong review from Variety. The picture stars the great Ellen Page as an American journalist weathering (or not) a worldwide plague of zombies in Dublin. Tom Vaughan-Lawlor is also on board.

Dennis Harvey at the industry bible noted: “Just when you thought nothing new could be done with the undead, The Cured pulls off a fresh take on zombie terrain. Irish writer-director David Freyne’s impressive first feature lends the dimension of political allegory that recently deceased subgenre king George Romero brought to his many “Dead” films, albeit in a somewhat subtler fashion. The result effectively plays more as serious drama than as horror thriller.”

Fionnuala Halligan at Screen Daily referred to “Freyne’s encouraging debut” and argued: “The Cured is at its sharpest when drawing acute political parallels. As a zombie film, the shocks are few – if effective – until The Cured lifts itself out of its porridgey aesthetic during the final act and its depressed cast of characters remembers to get their flesh-eating game on.”

Brian O’Malley’s The Lodgers was another Irish horror attracting positive attention. From a script by the perceptive academic and critic David Turpin, the film attempts Gothic chills in early 20th century Ireland.

Justin Lowe from the Hollywood Reporter felt it succeeded in that aim. He particularly relished the location work. “Loftus Hall, reputedly haunted by the ghost of a 17th century young woman, serves as the film’s dominant character,” he wrote. “A brooding stone edifice containing dozens of decrepit rooms with peeling plaster and a vast wooden staircase worthy of a Vincent Price horror classic. Each time the camera eerily glides through the entryway, it’s not hard to imagine that the building’s basement levels conceal some type of unspeakable evil.”

The good people at Variety were even more positive. Dennis Harvey wrote: “People tend to love Gothic horror for the atmospherics, not so much the narrative bones. The Lodgers certainly doesn’t have a lot of meat on those bones — not enough that you’d really want to dwell on the plot details afterward. But as a ripe chunk of pure baroque atmosphere, this lushly staged costume chiller is a fragrant beauty indeed.”

That phoney war was kicked off with the awarding of the People’s Choice award. There was more Irish interest with Martin McDonagh’s Three Billboards Outside Ebbing, Missouri grabbing the gong. This matters (insofar as the Oscars matter at all) because only one People’s Choice winner in the last decade has failed to secure a best picture nomination. The film stars Frances McDormand as a determined woman taking a stand against the cops who failed to solve her daughter’s murder.

The London-Irishman is in the race.