Darren Aronofsky: ‘My ego finds its way into all the films’

`Everything I do is autobiographical,' says the film-maker, so what are we to make of 'mother!', the maddest movie of the year, which stars his psychologically tortured real-life girlfriend Jennifer Lawrence 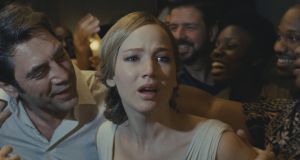 The plot summary of Darren Aronofsky’s oddly stylised mother! – yes, the lower-case lettering and exclamation point are mandatory; more on that later – runs thus: “A couple’s relationship is tested when uninvited guests arrive at their home, disrupting their tranquil existence.”

The house guests, however, are merely a trickle in the coming watershed of religious and mythological allusions. Inquiring minds – potential spoilers, ahoy – have theorised that the film reprises the Genesis creation myth: “I want to make a paradise,” insists the heroine, repeatedly. Against this, Domhnall and Brian Gleeson (playing the warring sons of the unwelcome couple) arrive to play Cain and Abel.

Later unhinged scenes include an Ash Wednesday-style anointing ceremony. A random frog may be a reference to the Egyptian goddess Heqet. Jennifer Lawrence may be Gaia. And that’s all before the film gets properly bonkers and transgressive.

No wonder Jennifer Lawrence’s initial response to the script was a text that read: “I think you have severe psychological problems.” (She soon got over her reservations: she and Aronofsky have been in a relationship since last year’s shoot.)

“Well, there was a baby 2,000 years ago,” Aronofsky adds teasingly. “Seriously, the film is very in the world of allegory and metaphor and dream logic. The dream logic makes sense. But not if you start pulling at it.”

Other commentators insist that mother! is an allegorical representation of creativity, in which Jennifer Lawrence is both muse and maker. In this spirit, the walls of the house emit a whale-like heartbeat, and there’s a vagina-shaped gash in one of the floorboards.

Elsewhere, her husband attempts to write (on parchment, no less). The ceremonial nature of his writing recalls Aronofsky’s own custom-built, Bastogne walnut work station, a desk containing a wooden pipe organ that plays with the opening of its drawers.

“Everything I do is autobiographical,” says the film-maker. “My ego finds its way into all the films. I am a ballerina in Black Swan. I am a wrestler in The Wrestler. I’m Jen in this movie. I am all those characters. That’s the great thing about cinema. Being able to inhabit different characters. You take parts of yourself and you pull at them like they were taffy and shape them into something.”

It’s interesting that Aronofsky identifies with Lawrence’s anxious house-frau and not Javier Bardem’s writer. Often, mother! feels like a crawling apology to those loved ones who have found themselves sidelined by creative process.

“Luckily for me, as a film-maker, I only have to work really hard for three months every few years,” says Aronofsky. “The rest of the time I’m a father [to one-year-old Henry, his son from his marriage to Rachel Weisz] and it’s a really great job. But I can relate to that feeling. And I can channel it into a character.”

Aronofsky exploded on to the cinematic landscape in 1998 with Pi, a Pynchonesque thriller about a number theorist finding patterns in the Torah. His subsequent films have been similarly dense. His historical sci-fi triptych The Fountain (2006) required eight years of troubled preproduction, budgetary challenges and recasting. Noah (2014), his $150 million swords-and-sandals epic, was decades in the making .

The first draft of mother!, which Aronofsky compares to the dream that inspired Paul McCartney to write Yesterday, took five days rather than 10 years.

“I’ve always been jealous of singer-songwriters – these guys or girls that write a song in half a day and they record it straight away and it’s out there. For film-makers, you can’t just communicate an emotion like that. It takes over two years – at the minimum – to make a film. So with mother! I was very interested in the idea of following an emotion and making a film out of it as quickly as possible.”

That particular emotion was rage. You would never mistake the mild-mannered, scholarly Aronofsky for Stanley Kubrick, say, bawling out Shelley Duvall on the set of The Shining. Yet plenty of his players have gone above and beyond for the Brooklyn-born auteur.

Natalie Portman once said it required her workaday duties on Thor to “delay the onset of a total breakdown from the efforts of doing Black Swan”. Russell Crowe compared the Icelandic set of Noah to “Chinese water torture” and claims to have suffered from hypothermia. Jennifer Lawrence tore her diaphragm from hyperventilating on the set of mother!

“Who had hypothermia?” asks Aronofsky.

“Oh. Okay. Maybe. I think that was a bit of an exaggeration. So look, I really didn’t have to push Jen at all. She is very engaged with her work. It was a very emotional scene and it was a moment of psychological stress and she pushed it too far. But she was a total trooper about it and kept going.”

Sixty-six minutes of mother! – more than half the run-time – are given over to close-ups of Jennifer Lawrence’s face.

“The idea was always to restrict the language of the film to over her shoulder and on to her face,” says Aronofsky. “I knew that would be very challenging for the actor. Just to be able to keep it interesting. But with Jen, it’s never dull.”

Eyebrows were raised over the 21-year age difference on-screen between Lawrence and actor Javier Bardem. It’s a tricky issue, given that J-Law has so often played opposite much older men and considering the real-life age gap with Aronofsky: he is 48, she is 27.

The director insists he did not write with her in mind, that the gap was intentional, and that originally the male character was in a wheelchair.

“It all happened organically. I didn’t think someone like her would be interested. But once Jen was in place, I needed someone to play against her. I needed a good partner. That was always going to be very, very tricky. But of course, Javier has that gravitas to him. So slowly but surely, we built the father-figure character from there.”

Last week Aronofsky introduced mother! at the Deauville Film Festival with a warning: “I just want to apologise for what’s about to happen. Everyone’s laughing and really liking me right now, but you will not remember a word of this in two hours.”

“I mean that’s what it’s all about. I’m happy to hear about all kinds of responses. I’m happy to have people talking. There are so many movies that you go to see and you might enjoy them. But you never think about them again. And I really want to do something different.”

Film fans might reasonably have expected fewer curve-balls and more Oscar-bait from a director of his calibre. Since he directed a resurgent Mickey Rourke in The Wrestler (2008), we’ve had two psyche-outs (Black Swan and mother!) and the screwiest biblical epic this side of The Last Temptation of Christ.

“But mother! is a total Oscar picture,” says the director, laughing. “What are you talking about?”

The seventh feature by Darren Aronofsky joins an elite list of movies that weren’t intended for spellchecking. Sometimes the stylised rendering sticks: David Fincher’s Seven is still annoyingly referred to as Se7en by a certain class of pedant. “There’s a reason that the film is lower-case. And you can find it in the end credits,” insists Aronofsky. “The exclamation is the actual structure of the movie. The film is kind of an exclamation point, and at the end of it, there is a big exclamation point.”