Official trailer for 'Paris Texas' starring Harry Dean Stanton. The Veteran US actor has died at the age of 91. 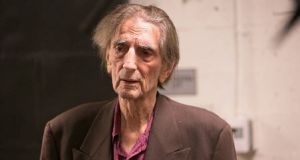 Veteran US actor Harry Dean Stanton has died at the age of 91, his agent has said.

The actor had appeared in dozens of films including Repo Man, Cool Hand Luke and Paris, Texas, as well as the recent reboot of television’s Twin Peaks.

Harry Dean Stanton has died at 91. Served as a cook during the Battle of Okinawa. Great man. pic.twitter.com/0pRzlDy2t4

Harry Dean Stanton has passed away at the age of 91. Devastating news, as we figured he'd outlive us all. pic.twitter.com/mM2sQA421m

In a career spanning 60 years, Stanton worked with some of Hollywood’s most notable directors, including Frances Ford Coppola (The Godfather Part Two, and One From the Heart); Sam Peckinpah (Pat Garrett and Billy the Kid); Martin Scorsese (The Last Temptation of Christ); David Lynch (Wild at Heart, The Straight Story, and Inland Empire) and Ridley Scott (Alien).

Versatile Dublin rappers: I'd like to thank all the smack heads on Abbey Street
10