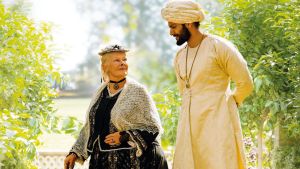 You could call Stephen Frears’s latest cosy entertainment a companion piece to John Madden’s sturdier Mrs Brown. In truth it’s so similar in structure that it practically counts as a remake. Queen Victoria’s relationship with an uppity servant rescues her from emotional torpor as it drives the prince of Wales and her secretary, Lord Ponsonby, puce with fury. Judi Dench returns as the queen. Eddie Izzard takes over as the prince. Tim Pigott-Smith, who died earlier this year, succeeds Geoffrey Palmer as Ponsonby.

When Frears directs Dench the viewer can expect, at the very least, reliable Sunday-night entertainment of a middle-brow hue. The least is what we get here. Dame Judi, older and grumpier than the Mrs Brown incarnation, does a splendid job of seeming bored by her relatives and unsatisfied by the enormousness of her banquets. The 20th century is looming and her court is sodden with imperial ennui. All that works well enough.

Twenty years ago, John Brown, in the agreeable form of Billy Connolly, arrived to shake up the various palaces. The current film details Victoria’s – in this version – inexplicable affection for her boring Indian servant Abdul Karim. It’s hard to know how much blame attaches to the Bollywood star Ali Fazal. He certainly doesn’t do much to show off his acting muscles, but, in Fazal’s defence, Lee Hall’s screenplay gives him little to chew upon.

Izzard’s prince and Piggot-Smith’s courtier view “the Munshi” as a disingenuous crawler who will bend the truth to favour his own ends. Whereas their racism cannot be forgiven, nothing here works against the core of their argument. At least Brown had charm. In Victoria & Abdul, the brilliant Adeel Akhtar, playing the hero’s great chum, acts Fazal off the screen in every scene.

Still, Dench just about keeps the film alive. She has to fight with some crazily anachronistic dialogue – notably a terrible, grandstanding speech in which she mentions her “uterus” before the court and refers to subjects as “citizens” – but the dame’s gift for intelligent sadness is always a delight to savour.

We are somewhat amused. Not a lot. But somewhat.