Eddie Izzard: I like to think I kicked the trans door open

The actor knows all about standing up for his principles. Can he take that to Westminster? 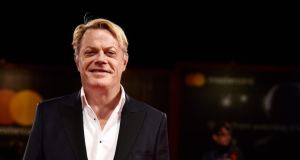 Where do you start with Eddie Izzard? The first activity mentioned in any potted biography will still be “stand-up comedy”. In the early 1990s he gained fame for a school of surreal humour that admitted no obvious influences. He was, at that time, a rare transgender person in the public eye. In recent years he has campaigned vigorously against Brexit and for Scotland to remain in the United Kingdom. He intends to stand as an MP. In 2009 he managed the seemingly impossible feat of running 43 marathons in 51 days. Anything else?

It would, perhaps, be polite to start with his fine performance as Edward VII opposite Judi Dench’s Queen Victoria in Stephen Frears’s Victoria & Abdul. The picture, an unofficial sequel to Mrs Brown, hangs around the relationship between the queen and her Indian servant Abdul Karim.

“I’m not into monarchy,” Izzard says merrily. “But it’s a great part to get when you consider I came from street performing to here. And I am up against Judi Dench, and I wanted to act since I was seven. Now I’m getting roles that allow people to say: ‘I didn’t know he did this.’ Not everyone has noticed.”

Izzard trained as an accountant before wandering off to begin his show-business career entertaining tourists in Covent Garden. I think of the Monty Python sketch about the chap encouraged to work his way to lion taming via banking.

“I was like the reverse of Walter Mitty, ” he says. “He was a guy who was an accountant who wanted to be an adventurer. I used to travel in on the train early to get a good slot at Covent Garden. It would be everyone in suits. I used to think, I could be an accountant. I could have done it.”

Be honest. You’ll want to know what he’s wearing. For this round of interviews the heroic polymath has on a neat tweed jacket and a pair of everyday trousers. His nails are free of polish. Now 54, he looks leaner and fitter than most people two decades his junior. The words spill out in an unstoppable torrent that accommodates fewer jokes than one might expect. He has a clear explanation for every attitude and action.

“I consistently follow logic,” he says. “John Cleese has talked about this in the early days. You follow the logic of any story all the way through.”

Let’s wrap ourselves in the flag. Izzard, the son of an accountant and a nurse, was born in Aden, in what is now Yemen, but spent some childhood years in Bangor. His mother died shortly after they moved from there to Wales, and he has spoken of his time in Co Down as the happiest of his life.

“I absolutely remember it,” he says, dropping into a pitch-perfect Bangor accent. “My mother was freaked out that we sounded like this. I remember saying ‘This wee thing’ and ‘That wee thing’. I later learned it was a middle-class accent. But we were just throwing mud at cars and so on. Even then I discovered I was transgender.”

He remained loyal to the old sod even in the worst days of the Troubles. He remembers his team being particularly nervous after the Greysteel massacre, in 1993. “My tour manager wouldn’t go back. They said they weren’t going up from Dublin to the North. I said: ‘I’m going.’ So I drove the car up myself and did three gigs in Belfast and one at the Rialto in Derry-slash-Londonderry.”

He says that he knew he was transsexual almost before he went to school. When did he embrace that identity? “I told my ex-girlfriend at 21. I remember telling a doctor at the medical centre in Sheffield University. I asked who I should see, and he said he’d send me to the psychiatrist and he’d have a big book or something. He’d tell me to take these pills or do some exercises. Ha ha. But I didn’t do that. I self-analysed.”

Public attitudes to transgender people have changed significantly in the succeeding years. Younger people are infinitely more accepting of diversity than were their parents. Meanwhile, fights have broken out in academia. Older feminists such as Germaine Greer have got in trouble for suggesting that trans women do not deserve shelter under the feminist umbrella.

“Well, that is going to happen,” he says diplomatically. “I came out 32 years ago. If everyone is allowed freedom of speech – as they are – then you can get into all kinds of arguments. I don’t track that. I like to think that I have kicked the trans door open, so there is more acceptance. I am straight transgender as well: this ‘wannabe lesbian’. People say: ‘Surely you’re lying.’ Why would I lie and take all that grief in the street? It’s a complicated thing.”

Izzard certainly seems up for a fight. For the past decade or so he has proved increasingly willing to argue his causes at public meetings and on Question Time

Izzard certainly seems up for a fight. For the past decade or so he has proved increasingly willing to argue his causes at public meetings and on Question Time, on BBC television. His opposition to Brexit probably played well to his natural constituency. His opposition to Scottish independence will have caused greater unease among Izzard fans. There were more than a few SNP supporters who rocked back at English celebrities travelling north to support the Union.

“But I had a very specific message, which was that over 80 per cent of the rest of the UK wanted Scotland to remain. That’s a good message,” he says. “This was an English person, who had run eight marathons with the Saltire and had played every major town in Scotland up to Shetland, saying: ‘Be aware that we are with you. Whatever you decide we are with you.’ There was this idea that if you were for staying in the United Kingdom you were not a Scottish patriot. That’s not true.”

He now faces another battle. Izzard says that he hopes to stand as an MP for the British Labour Party at “the first election after 2020”. He certainly has the oratorical skills. He has the charm. But the atmosphere in the party seems unwelcoming to his school of radical moderation. “Centrist” has become almost as a dirty a word as “fascist” in activist circles.

“I am a radical moderate,” he agrees. “We have to be a broad church. If anyone in our party or the Conservative Party says it has to be just one slice then they won’t get elected. They go from centre right to far right. We go from centre left to far left. We have to cover that.”

Do Jeremy Corbyn, the Labour leader, and John McDonnell, its shadow chancellor, agree with that? “It doesn’t really matter. If you analyse it that is correct. You’ll have to ask them. Jeremy has the wind in his sails, and if he can win the centre of the country then go for it. We just won the ‘perception election’ if not the actual election. Everyone is trying to separate and divide. I won’t do that.”

Izzard is a walking repudiation of the argument that moderation is incompatible with passion. Once he gets going on this he can’t be stopped

Izzard is a walking repudiation of the argument that moderation is incompatible with passion. Once he gets going on this he can’t be stopped.

“We have to have a fair world for every person,” he says. “Otherwise I think we are going to wipe ourselves off the planet. Moderates have to get active and get out there and get voting. Otherwise the extremes are going to pull us apart. Look at 1930s politics. Somebody has got to buy a book. Get a DVD. Look what happened last time.”

Anna Neagle Every now and then it’s worth reminding yourself that Neagle, now largely forgotten, was the most popular British actress of her day. She played Victoria twice: in the stuffy Victoria the Great (1937) and stuffier Sixty Glorious Years (1938).

Irene Dunne Jean Negulesco’s The Mudlark (1950) starred young Andrew Ray as an urchin whose activities end up drawing the queen out of mourning. Alec Guinness is Disraeli. The brilliant Irene Dunne – five-time Oscar nominee – was a touching Victoria.

Peter Sellers Joseph McGrath’s The Great McGonagall (1974), story of the famously bad poet William McGonagall, is one of those great oddities that kept the British film industry simmering in the 1970s. Sellers is agreeably mad as Victoria.

Judi Dench Another two-time Victoria, Dench excelled as the middle-aged queen in Mrs Brown (1997) but lost the Oscar to Helen Hunt. She returns grumpier and more cynical in this week’s Victoria & Abdul. The definitive Victoria.

Victoria & Abdul is on general release

Harlots? It’s all pumping buttocks from the men. Which is fair enough
7

Historians pay tribute: ‘Today we live in John Hume’s Ireland, and thank God for that’
10