Sit down, Wonder Woman. Here’s how avenging angels should roll 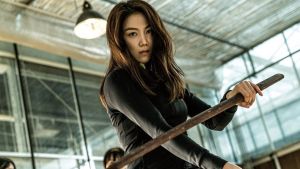 Sit your waxed arse down, Wonder Woman. Here’s some old-school Asia Extreme riffs to show you how avenging angels ought to roll.

The Villainess opens with a blistering first-person shoot-’em-up, cut-’em-up, shoot-’em-up charge down the corridor of a meth factory. Picture Oldboy’s most iconic fight scene but faster and with more weaponry.

Eight minutes and many bad-guy corpses later and we establish that the rampaging assassin is a woman. Well, phew. They couldn’t possibly sustain that level of carnage? Or could they?

A few completely nutty plot twists and flashbacks later and Kim Ok-bin finds herself in a government facility where they train killers in acting and cooking: all the better to enter society as a sleeper agent.

She’s not happy about these new digs but she is pregnant with her dead husband’s child, so she agrees to stop attempting to escape and to play ball with the ill-defined Korean Intelligence Agency.

Soap opera convolutions follow, in a narrative trajectory that might have been cribbed from La Femme Nikita, Kill Bill and The Raid. These entertainingly unlikely developments – plastic surgery, returns from the dead – merely provide the foundation for more fights with axes, fights with swords and – sit tight – fights with swords on motorbikes.

The enthusiastic and committed Kim Ok-bin may not possess the mesmerising fighting skills of JeeJa Yanin (Chocolate) or the etched focus of Lee Young-ae (Lady Vengeance), but working with innovative stunt co-ordinator Kwon Gui-duck, cinematographer Park Jung-hun and director Jeong Byeong-Gil, she makes for plenty of unrivalled and breathtakingly unhinged spectacle. No wonder the gang received a 10-minute standing ovation at Cannes.

Mother! doesn’t get dibs on all the crazy this week: stand up for this year’s most demented actioner.