Frank Vincent, mobster on ‘The Sopranos’ and ‘Goodfellas’, dies aged 80 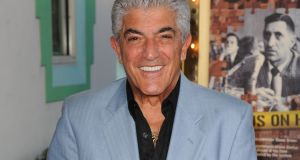 Frank Vincent, whose tough-guy looks brought him steady work as a character actor in film and television for four decades, including mobster roles on The Sopranos and in Goodfellas, died on Wednesday in a New Jersey hospital at the age of 80.

Vincent was born in North Adams, Massachusetts, and raised in Jersey City, New Jersey. His first forays into show business were as a drummer, playing in nightclubs and on recordings with singers Paul Anka and Trini Lopez. He made his film debut in 1976 in The Death Collector, whose cast also included his friend Joe Pesci, a fellow musician. (Pesci plays guitar). The two had once worked up a comedy act.

Among those who took note of The Death Collector was Martin Scorsese, who cast both Vincent and Pesci in Raging Bull (1980), about boxer Jake LaMotta, and, a decade later, Goodfellas.

That film gave Vincent perhaps his most memorable line, in the role of Billy Batts, a mobster who profanely invites Pesci’s character to go home and get his shine box, an insult that proved fatal. Mugs and T-shirts emblazoned with the line were soon being sold.

The character of Billy Batts made such an impression that it kept him off The Sopranos, at least at first, Vincent told an interviewer. He originally auditioned for the pilot of the series, created by David Chase, which began its long run on HBO in 1999. Dominic Chianese and Tony Sirico auditioned with him.

“They got hired and I didn’t,” Vincent said in a 2006 interview. “David now in retrospect says he didn’t want to hire me at that time because Goodfellas was too popular and the character Billy Batts was too known to put him into that mix.”

Vincent was brought into the cast in 2004 as Phil Leotardo, a crime boss. The character appeared in more than 30 episodes, ultimately meeting a gruesome end.

In the book, he wrote of being approached at a mall by three women who gushed over his Sopranos character. He expressed surprise, since the character is so tough. “They went on to tell me that it had absolutely nothing to do with the fact that Phil Leotardo kills people on the show . It had to do with the fact that he exudes confidence and power,” he wrote. “He’s a man’s man, for sure. For the record, there’s a good bit of myself in Phil Leotardo.” – (New York Times News Service)

Dermot Kennedy: ‘I won’t let anyone take advantage of me or my music’
9

Malachy McCourt: ‘Frank wouldn’t be happy unless he was miserable’
10