Jungle Bunch review: Interspecies love and terror among the trees 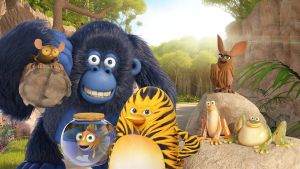 Jungle Bunch: not as bad as The Nut Job 2

Take a hike, Spark and The Nut Job 2: there’s a new low-rent kids movie in town. The Jungle Bunch, adapted from a popular French TV series, feels so familiar – and yet, so odd – that it might have begun life as fanfic inspired by the Turkish Coco Pops ad or by Senhor Bouncy, a Brazilian rip-off of Kung Fu Panda I just made up.

Say hello to not-Tigress (Dorothy Fahn) or rather, Natasha. This large vigilante cat is part of crack team of animal defenders known as the Champs.

Years pass, and it falls to Maurice and his pals – including monosyllabic Miguel the gorilla, Gilbert the genius capuchin, token female bat Batricia, and two goofy toads – to police the jungle. Daily duties include ointment rubbing and baboon baiting until, of course, Igor returns and the place literally and figuratively goes up in smoke. It’s time for the Jungle Bunch to step up. Or for the Champs to come out of retirement. Or for one of those things to happen, then the other.

Before you can ponder the weirdness of the interspecies romance between the bat and the primate, or indeed, a family lineage that saw a fish adopted by a penguin who, in turn, was raised by a tiger, there’s the strange plot to contend with. Why does the koala want to destroy the jungle? Why does the koala’s crab sidekick put up with him?  Since when were marsupials so handy with explosives?

On the plus side – and we’re stretching the definition – the fur is nicely animated, the wacky plot is seldom dull, and a lack of snark and sass makes for marginal improvements on The Nut Job 2.

Marian Keyes: ‘What doesn’t kill us makes us funnier’
7