New this week: J-Law in the mother of all weird-outs and an unhinged Asian Extreme 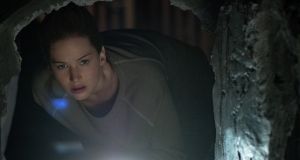 Jennifer Lawrence in Mother!, ‘a disgusting, disturbing feast for the senses’.

Lawrence and Bardem occupy a house in an endless nowhere. Their uneasy calm is distracted when a couple (Harris and Pfeiffer) arrive rudely and uninvited. It begins as Who’s Afraid of Virginia Woolf and ends in a Grand Guignol of (we assume) metaphorical chaos. If you thought Aronofsky’s Black Swan was overheated, then you are in for a proper shock. Kept aloft by a ragged, unusually disempowered Lawrence, Mother! remains, however, a disgusting, disturbing feast for the senses. Review/Trailer DC

The Villainess opens with a blistering first-person shoot-’em-up, cut-’em-up, shoot-’em-up charge down the corridor of a meth factory. Picture Oldboy’s most iconic fight scene but faster and with more weaponry. Eight minutes and many bad-guy corpses later, we establish that the rampaging assassin is a woman. Well, phew. They couldn’t possibly sustain that level of carnage? Or could they? Close enough. Mother! doesn’t get dibs on all the week’s crazy: stand up for this year’s most demented actioner.Review TB

Tolerable, industry-standard adaptation of Stephen King’s bullet stopper concerning a malign spirit – notoriously in the form of a clown – who feeds on the fears of a New England town. The escalating horrors are delivered via a rapid fusillade of discrete episodes that suggest journeys in a clunky, analogue-era ghost train. When all else fails, let’s have the mad clown jump loudly from the nearest large box. But it’s efficient enough. Review/Trailer DC

Sheridan’s script credits include last year’s hit neo-western Hell and High Water. Squint through the snowscapes and this procedural could be High Water’s wintry cousin. Olsen is an FBI agent dispatched to an Indian reservation to help Renner’s parks and fisheries operative with a murder. Weary resilient locals trade in dark, cynical humour. Nick Cave and Warren Ellis’s score is as sparse as the frozen horizons. The mystery is very satisfactorily resolved. Very worthwhile. Review TB

The SXSW documentary competition winner is a fascinating chronicle of catharsis. Every year Folsom Prison, the maximum security institute immortalised in song by Johnny Cash, allows several members of the public through the gates to take part in the “Inside Circle”, an intensive four-day group therapy programme. The work of the title refers to the exorcism-like process that occurs during the interactions between society’s most hardened offenders, the visiting civilians, and the prison’s resident councillors’. Gripping, odd, original. Review TB

Beautiful, rugged drama concerning the relationship between a young Yorkshire farmer and the Romanian shepherd who arrives to help an lambing time. O’Connor and Secareanu make eye-catching breakthrough turns within a very fine ensemble. Director of photography Joshua James Richards finds bright spots in the bleak midsummer. The interiors, some of which were shot at directgor Lee’s own family farm, are authentically distressed and fondly framed. One of the best you’ll see this year. Review TB

Mad Men made perfect sense during the swirling disorder
7