Moe Dunford: I’ve worked my ass off to get work in Ireland 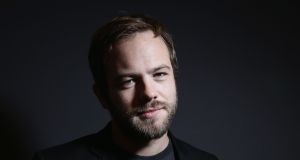 Moe Dunford: "I’m older now and I’m well aware of how to use this as an opportunity to spread my wings." Photograph: Vittorio Zunino Celotto/Getty Images

Late skaldic poetry describes the Viking execution method of blood eagle, in which victims were kept alive while their backs were sliced open so that their ribs, lungs and intestines could be pulled out to form the shape of bloody wings. This gruesome ritual has featured in the TV series Vikings, alongside death by axe, crossbow, puddle, skull-crushing and by pit of snakes.

So spare a thought for Moe Dunford. Last year, the Irish actor who played Aethelwulf for three series of Vikings exited by way of asphyxiation after being stung by a bee. It’s not quite as dramatic as the old blood eagle ritual.

“I’ve gone the way of the dodo,” smiles Dunford. “Over the years, I’ve seen so many of my coworkers come up and tell me they’re about to get their head cut off. And in the back of my mind I’m laughing because it hasn’t happened to me. I did have to check in with myself. This was four years of my life and they were four joyful years. I learned so much. I learned to be quiet and still and that’s a skill in itself.

“Michael Hirst, the main writer would take on board notes from actors. I only ever went after two things. One was that I’d love my own fight scene to give the character a bit of grit. And the other was to have it out with the man who played my father. So there was [an] arc there. I was ready to go. My character had aged about 20 years over the four. I wasn’t far behind.”

The last time I sat down with Dunford, he had just completed his first lead role in Terry McMahon’s feature Patrick’s Day and was heading to the Berlin International Film Festival, where he was honoured at the European Shooting Stars Awards.

There was already a considerable buzz around him on the back of appearances on Game of Thrones and The Tudors. His role in Patrick’s Day would ultimately land him the first of two IFTAs.

“If I could work with one person again it’s Terry McMahon,” says Dunford. “My favourite film-makers are people like him and Lynne Ramsay and Aisling Walsh. They’re risk takers. And Terry took a risk on me. It doesn’t make sense to me that Terry has to go to Nigeria to work.”

Five years on from Patrick’s Day, and Maurice “Moe” Dunford has just completed work on a new Irish feature, The Dig, and is heading to California’s Newport Festival where he will be presented with the Breakthrough Artist Award. The actor stars in three of the festival’s films, including Hugh O’Conor’s Metal Heart, the Roddy Doyle-scripted Rosie, and The Dig.

“It’s great timing because it’s just after my first lead role in five years in a film I’m really proud of,” he says. It’s not like it’s a second chance, because every job you do is another chance, but I’m older now and I’m well aware of how to use this as an opportunity to spread my wings [and] go for a bigger jobs and more opportunities.”

The Stuart Drennan-scripted The Dig is the first feature from Irish brothers Andrew and Ryan Tohill, although both have extensive industry experience: Ryan has worked in the art department on Games of Thrones since 2012; Andrew has edited several documentaries including Road and To Be Frank Carson.

The Dig concerns Ronan Callahan (Moe Dunford) who has returned to the boarded-up house where he grew up having served 15 years for the murder of his girlfriend. Her remains have never been found and he was too drunk to remember anything about the event.

Returning home, he finds the victim’s father still obsessively digging in the bog behind the house, in the hope of finding her body. After several tense stand-offs, Ronan picks up the shovel and joins the older man in the mucky enterprise of the title.

“I was filthy for four years for Vikings,” says Dunford. “But having said that, at least you always had about 50-100 lads around you so there’s a sense of camaraderie and they’re telling you to get up out of it. For The Dig you were kind of on your own in November in an Antrim bog. There were countless times that it was tough but I just kept telling myself that it’s going to look good on screen.

“I had sent the script to my father – I do that every now and again because he likes to read scripts – and he said to me: no matter how sick you get or how cold you get, it’s gonna look great. It was really cold. Everyone on the shoot had very little sleep to get it done in three weeks. But I loved every second of it. It was one of the most collaborative experiences I’ve ever had on a film. There was such respect among the crew. I’m not going to complain about the weather; it was a great gig and a great part.”

Dunford’s impressive turn was partly inspired by Martin McCann’s brilliantly brooding performance in the post-apocalyptic thriller, The Survivalist. The wind helped too.

“I learned to cry on cue just by facing into the wind,” says the actor. “You could feel Martin McCann’s anger in The Survivalist. I was taken aback by what he could convey without dialogue, with what he could do with his eyes alone.”

The Dungarvan-born Dunford says he missed Irish film during his Viking years and he has certainly been making up for lost time. Last year, he appeared in Rosie, The Lodgers, Black 47, and on TV he played Amy Huberman’s love interest on RTÉ’s Striking Out.

“It feels like I’m carving out my own career at my own pace,” he says. “You’ve many days of ups and downs as an actor. It ain’t easy. Recently I was going for a few TV jobs here and I was told that someone up high said don’t let Moe work on any of these; he’s done enough. I’ve worked my ass off to get work in Ireland. But I still have the same enthusiasm for the work as I had starting out.”

A fan of Frank Berry’s community-based approach for his 2014 feature I Used to Live Here, Dunford contacted the director ahead of his terrifying turn as a prison kingpin in Berry’s Michael Inside, in which he does awful things with pillows and boiling water.

“I don’t think my character in Michael Inside was an evil guy; I think he was twisted by the system,” says the 31-year-old. “That was something I very much wanted to come across. Especially because of the way Frank works. This is based on research; it’s based on real people. My fear was that these real people would be upset. But I agree that pouring a kettle of boiling water over somebody else is not pretty. We shot that on my first day. So you’re doing something really violent over and over and then Frank comes along and takes off his cans [earphones] and says: (adopts gentle voice) that was great!”

As a youngster, Dunford moved from Waterford to Cork where his father ran a pub, before a career switch into addiction counselling. It’s perhaps not too surprising that Moe shares that sense of responsibility. He’s not a political animal, he says, but he is keen on socially engaged projects.

“The reason why I became an actor I wanted to break down walls,” he says. “I don’t like the idea of young people feeling constrained or having a lack of self-confidence or an inability to achieve their goals. There’s lot of value in some of the stories I’ve been involved with. You look at what’s happening at the Abbey and the questions about cosy co-productions. That theatre used to have Seán O’Casey and riots. You look at what’s coming out of Ireland right now and you realise a little bit of anger can go a long way.”

The Dig is released April 26th