Dragged across Concrete: A grindcore variation on cops and robbers 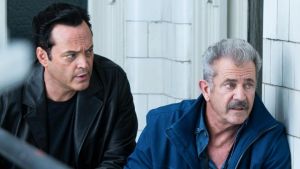 As Dragged across Concrete arrives after his brilliant Bone Tomahawk and Brawl in Cell Block 99, it’s hard not to feel a little disappointed by S Craig Zahler’s third film, even if it does reaffirm the writer-director as the most imaginative creator of worlds in the business.

There is downtime in the downtime in this wayward meta-anti-film, a grindcore variation on cops and robbers. Forget fast cuts: every Ritalin shot is medium close, still and hideously coloured with snot-green, blaring-red or puked-mustard interiors and filters.

The crawling dialogue, a series of signposts and motivations, does the opposite of zing: “We have the skills and the right to acquire proper compensation,” or, “You’re losing perspective and compassion.”

“Being branded a racist in today’s public forum is like being branded a communist in the 1950s,” Johnson’s police sergeant scolds Gibson. The racial politics of Dragged across Concrete are nothing if not provocative.

Ridgeman has a chronically ill wife and a daughter who is repeatedly bullied by black boys. He wants to move to a nicer neighbourhood. His volatile younger partner is thinking about the kind of future he can offer his girlfriend: “I’m thinking about the kind of future I can offer my girlfriend,” he says. There’s only one thing for it: follow a tip from a shadowy German (Udo Kier) and go for a big score.

Elsewhere, Henry (Tory Kittles) gets out of prison and finds his mom turning tricks and his wheelchair-bound brother dreaming of a bright future in game design. There’s only one thing for it: recruit his pal Biscuit (Michael Jai White) and team up with another shadowy German (Thomas Kretschmann) for one big score.

The mirrored narrative – white cops going rogue, black robbers maybe doing the opposite, each with their own sinister white European – and the many dramatic pauses make for a fascinating space, albeit one that lacks the appealingly loony mythology of Zahler’s previous films.

Many genre fans will flinch, but if you can throw down with postmodernity and the prickliness, this is something to see. And hear, too: for the third time, Zahler and Jeff Herriott have composed a note-perfect soundtrack.