Sex in the movies: Why there’s no ‘sick filth’ left to ban

Pornography – even hard-core – was once big box office. The internet changed everything 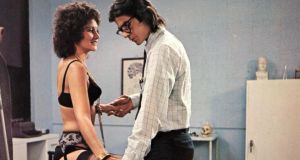 Where have all the sexy films gone? If it goes on like this the tabloids will have no “sick filth” left to ban.

We usually get the future wrong. A thoughtful observer in 1972, if viewing the world from somewhere other than censor-happy Ireland, might have guessed that cinemas in the 21st century would be groaning with sexual content. We wouldn’t be able to move for all the riding.

The list of highest-grossing films in the United States for that year now offers bewildering reading. The Godfather at number one? Fair enough. The Poseidon Adventure at number two? Makes sense. The disaster movie was just about to enjoy its high period. But what’s this at number four? The Mitchell brothers’ Behind the Green Door, a hard-core pornographic film starring Marilyn Chambers, took $50 million to become a real mainstream success.

In the confused aftermath of the sexual revolution, pornography gained a now inexplicable bourgeois respectability

In the confused aftermath of the sexual revolution, pornography gained a now inexplicable bourgeois respectability. Given the irregular accounting, nobody knows how much Deep Throat, an even bigger sensation, took in during the same period, but some rogue estimates have mentioned $500 million. By 2019, explicit sex in cinemas would be more common than car chases. Right?

The Guardian noted recently that just six films in 2018 received 18 certificates from the British Board of Film Classification for sexual content alone. In that nation and Ireland only two have, so far this year, suffered the same fate: the BBFC and the Irish Film Classification Office both put an 18 the way of Paolo Sorrentino’s Loro and Claire Denis’s High Life.

Lest the faces behind the twitching windows go puce, we should note that this development has more to do with the content being submitted than to any shift in policy. Ger Connolly, the current director of IFCO, notes that just six films out of about 80 have got an 18 so far this year – others, such as the upcoming Dragged across Concrete, were classified for extreme violence – and that this marks a notable decline since he joined the office.

“All I can surmise is that production attitudes have changed,” Connolly says. “There are fewer bad movies being made to get skin on screen – to get guys in the door. They don’t need to do that any more. Yet you still can have a good, serious film that has sexual content, like Blue Is the Warmest Colour.”

You can blame (or thank) the internet. The rise of online pornography has done for a certain type of explicit content in cinemas. If a person wants to see Marilyn Chambers doing what she did in 1972 that person can watch the sufficient 15 minutes in the privacy of his or her tiled room.

Meanwhile, we are still enjoying the more relaxed attitude to sexual content that arrived, a little late, to the Irish Film Classification Office at the beginning of the millennium.

“It would want to be very graphically simulated sex to get an 18,” Connolly explains. “Most sexual content will get a 16. The bigger concern for us is sexual violence. That’s a very different thing.”

Quite right too. But that attitude opens up other debates. In an era when 18 certs are so rare, many were surprised to see Fifty Shades of Grey and its sequels receive the harshest grade from both the IFCO and the BBFC. Yes, the films hung around sexual violence. But surely consent is relevant here. The dreadful adaptations of EL James’s even worse novels work painfully hard to assure us that Dakota Johnson enjoys getting biffed by Jamie Dornan.

“Well, the last 50 Shades of Grey was borderline,” Connolly says. “It could have been 16. It was almost comedic. That sadomasochistic content, whether consensual or not, would be classed in the higher reaches, because of the violence. But anything nonconsensual would still be the biggest concern for us.”

So it’s not black and white. It’s shades of… No, let’s not go there.

Forty years ago mainstream films were tagged with an 18 cert for sexual content. That dubious honour is now largely reserved for the art house

Self-censorship now triggers almost as much outrage as state censorship. It was the studio’s own decision to play down the gay sex in Bohemian Rhapsody that sent protesters to the online barricades last year. The Chinese cut of that film removed any remaining references, however vague, to Freddie Mercury’s sexual adventures. Eyes are now turned suspiciously towards the upcoming Rocketman. The well-known good egg Elton John has granted the film-makers permission to show any excess in Dexter Fletcher’s biopic, but the studio will want to negotiate as liberal a certificate as possible. This is still about money.

Ger Connolly insists that he and his fellow officers are no more censorious of gay sex sequences than they are of explicit straight scenes. “I am extremely conscious of the necessity to treat all the same,” he says. “I think classifications here would bear that out. The most obvious one would be The Queen of Ireland, the documentary on Panti Bliss. We gave that a 15A, and it was 18 in Britain. I am conscious that we are fair across the board.”

You can no longer put a cigarette paper between the two boards. The recent Irish film Kissing Candice did get an 18 from IFCO and a 15 from the BBFC, but converse examples, such as Conor Horgan’s fine Queen of Ireland, are just as common.

As Connolly notes, when it comes to sexual content, fewer such conversations now need to be had. The market has decided that the big money is in family friendly romps such as Star Wars and the Marvel Cinematic Universe. There were no 18 films in the worldwide top 10 last year, and just one – Deadpool 2 – with a 16 certificate.

“It’s not box office any more,” Connolly says. “There’s a big cinema audience at 15 to 20. And they’re the ones being catered for.”

This has had an unexpected effect. Forty years ago mainstream films were regularly tagged with an 18 cert (or X, as it once was) for sexual content. That dubious honour, the odd Fifty Shades aberration aside, is now largely reserved for the art house.

You don’t get that sort of good clean fun in the Megaplex any more.