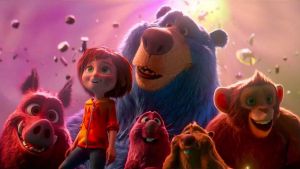 A scene from ‘Wonder Park’

Wonderland, as the imaginary fairground is called, is staffed by a narcoleptic bear (Tom Baker), naughty beavers, and a sassy warthog (Mila Kunis).

When June’s mother announces (rather abruptly) that she is sick, the distraught little girl bins Wonderland and fusses over her with her bumbling dad (Matthew Broderick). She is then sent to maths camp, only to run away from an appallingly supervised school bus and into the forest where – hang on a minute – she wanders into the real Wonderland, which is now beset by darkness and chimpanzombies.

Remember Shane Carruth’s 2013 mindbender Upstream Colour? The film in which larvae pass from humans to pigs to orchids to enigmatic effect? The premise of the baffling, Skittle-coloured Wonder Park makes Upstream Colour seem like a Scooby Doo mystery.

Eagle-eyed viewers may note the absence of a film-maker in the opening credits. The director, Dylan Brown, a former animator at Pixar, was taken off the project by Paramount in January 2018 after the studio’s investigation into complaints of “inappropriate and unwanted conduct”.

This may explain for the film’s rudderless plotting. Although it’s hard to think of a version of Wonder Park that would fly. Grafting together bits of other, better movies – Inside Out, My Neighbour Totoro, Bridge to Terabithia – this ill-conceived animation is a conceptual chore. The animation is sleek, although it lacks the visual pop one might expect for a reported $100 million production budget. The character designs are hackneyed. The writing is makeweight at best. The decision to recast with British voices – YouTubers Joe Sugg and Caspar Lee replace Ken Jeong and Kenan Thompson – adds nothing to an unpleasant experience.

This writer would like to thank the young gentleman who vigorously kicked the back of her chair during the family preview screening, thereby keeping her awake at a difficult time.

An Post Irish Book Awards 2020: a celebration of great writing
9