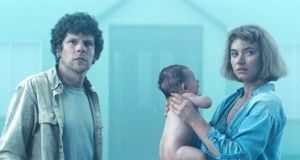 Lorcan Finnegan’s science fiction film Vivarium, an Irish production for Fantastic Films, will have its world premiere next month as part of the prestigious International Critics’ Week (Semaine de la Critique) at the Cannes film festival.

Brendan McCarthy and John McDonnell, founders of Fantastic Films, a Dublin-based company focussed on genre material, will be among the producers travelling to the Côte d’Azur in May.

“Fantastic Films is delighted that Vivarium has been selected for Critics’ Week at the Cannes Film Festival,” McCarthy said. “Producing Vivarium was a long and winding road and we are looking forward to screening Lorcan Finnegan’s wonderful film at this prestigious event.”

My new film VIVARIUM will premiere at Critics Week in Cannes!💥💥💥 https://t.co/rfgb90NLQf

Finnegan’s Without Name, an existential horror, premiered at the Toronto International Film Festival in 2016. The Irish filmmaker has previously directed high-profile commercials and acclaimed shorts such as Changes and Foxes.

“It’s an honour to be selected and a perfect launch for the film,” he said. “None of this would have been possible without the creative and financial backing of Screen Ireland.”

Critics’ Week is the oldest parallel strand at the Cannes Festival. Focussing on first and second features, it has, in previous editions, launched such talents as Bernardo Bertolucci, Wong Kar-wai, Jacques Audiard and Alejandro González Iñárritu. Recent films to break through at the section have included David Robert Mitchell’s It Follows, Julia Ducournau’s Raw and Myroslav Slaboshpytskiy’s The Tribe.

Founded in 1962 by the French Syndicate of Cinema Critics, the strand selects just seven films in its main competition and inclusion is, thus, a cause for particular celebration. Listed films compete for the Nespresso Grand Prize for Best Film and the Louis Roederer Foundation Rising Star Award for Best Actor or Actress.

Sofia Quiros Ubeda’s Land of Ashes is the only film by a woman in competition at Critics’ Week this year. Icelandic director Hlynur Pálmason, whose Winter Brothers was well reviewed in 2017, is in the race with A White, White Day. Our Mothers is the first feature by Pálmason from Guatemala. The section also screens a selection of short films. Some 1,050 features were submitted to Critics Week.

The 58th edition, chaired by Ciro Guerra, director of Embrace of the Serpent and the upcoming Birds of Passage, will open with a special screening of Franco Lolli’s Litigante on May 15th. The only Critics’ Week selection to feature Anglophone movie stars, Vivarium is sure to attract much attention.

Milis an teanga an Ghaeilge
8